Protesters say federal law enforcement officials from the U.S. Marshals Service and Department of Homeland Security, which Portland Mayor Ted Wheeler refers to as President Trump’s “personal army,” have stormed through Portland, snatching peaceful protestors right off the streets, then hauling them off in unmarked vans. All this, as part of Donald Trump’s campaign promise to “protect the statues.”

Gee, it’s almost enough to make you wonder whatever happened to all those “freedom-loving,” 2nd Amendment NRA trolls, who claim all their fancy assault weapons are needed to protect US citizens from our evil, tyrannical government?

Guess they must be off somewhere, mad as hell and pouting about having to wear a damn face mask, every time they go into their local 7-Eleven, to purchase cigarettes and a six-pack of Pabst Blue Ribbon beer.

Anyway, mark my words, if Trump can get away with this, he can get away with anything. Hell, I wouldn’t be a bit surprised to one day open a magazine and see Trump along with his jackbooted, Stormy Daniels troopers, posing while holding up a big, family-sized can - of those delicious Goya beans. 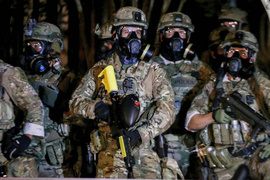 "Paranoia strikes deep, Into your life it will creep. Starts when you're always afraid, step out of line, the man come, and take you away...." For What It's Worth- The Buffalo Springfield

The way it's going, we'll be living the movie Soylent Green before I'm dead. " The scoops are coming....".

I remember that song very well. It applies to today. I live in Minneapolis, about four miles away from the location where George Floyd got murdered. Whole city of full of tension. I feel as though I have been dropped into a horror movie.

Yes. The parallels are terrifying.