Michael Caputo, a top communications official at the Department of Health and Human Services (HHS), urged President Trump’s supporters during a recent Facebook Live chat - to prepare for an armed insurrection after a contested election, and accused government research scientists of “sedition.”

During that chat, Caputo also complained he’s been under heavy attack by the media and that his “mental health has definitely failed,” noting he’s been seeing “long black shadows on the ceilings of his apartment.” Hmmmm, so his “mental health” failed him did it? Well, I guess that pretty much explains why Trump hired him in the first place - and, for that matter, why Caputo would even accept the job.

Even so, what’s the big deal? I mean, so we happen to have a paranoid, political hack and former Vladimir Putin media consultant, publicly having a mental breakdown, while advocating armed insurrection against the United States, all while running a federal agency, that he basically knows nothing about.

I mean, who could be upset about something like that? Time to calm down people, and take comfort in the fact of knowing that if the situation were to somehow ever get too far out of hand - Attorney General Barr would be all over it. 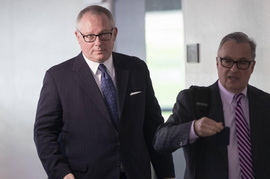