Corporations Doling Out Millions to Executives Before Filing Chapter 11

New data indicate that since the pandemic struck last March, at least 18 large corporations, including Hertz, Neiman Marcus and J.C. Penney, awarded their executives with six- and seven-figure bonus payouts, totaling more than $135 million, just prior to asking bankruptcy courts to shield them from creditors during restructuring, then collectively claimed to be more than $79 billion in debt and began firing thousands of employees.

So, apparently “looting” turns out to be perfectly acceptable to Republicans after all. That is, just as long as it’s executives who are doing the looting and not poor people. And, it’s all part of the 2020 Republican campaign’s "Executive Lives Matter” initiative.

Now, the way I see it, there’s a lesson to be learned in all this for our young people - and that lesson is “if you fail, and fail often, and fail badly enough, you just might be CEO material for some large, multinational corporation too. 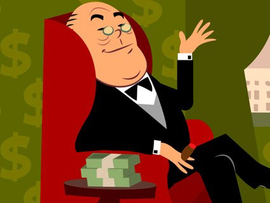 This is news???? "Golden Parachute", anyone?

Figures, CEOs are the Nobility of the 21st century.
Which is to say they’re fucking crooks that contribute nothing while taking all the profits while their employees struggle to feed their families.
They say the poor will rise to eat the rich, they mean CEOs.

That's why gulliotines would the appropriate retro solution to eliminating them.