Officials in multiple states say they were alerted late Wednesday that their second shipments of Pfizer’s vaccine had been drastically cut, sparking widespread confusion and conflicting statements from both Pfizer and federal officials about who is at fault, with the Trump Administration claiming Pfizer is having production difficulties, and Pfizer countering that they are having no production issues at all - and have many millions of doses immediately available, above and beyond what is already being distributed.

Of course, before we pass judgment here, we all know that there are always two sides to every story. That said, you can be pretty damn sure that the Trump side - will consist primarily of complete nonsense, sprinkled on top of a heaping mound of total and utter bull sh*t.

Just consider what a funny world we’re living in these days. A world where a damn pharmaceutical giant is now perhaps a 1000 times more believable than our own federal government. Oh well, not to worry, I’m sure Trump will have Jared Kushner sort it all out for us in due time.

But gee, it’s still hard to imagine what could have happened here? I mean, Pfizer has plenty of vaccine on hand, transportation has been arranged, and yet someone is telling them not to ship. I think the Trump Administration even has a name for this operation. I believe it’s called “Operation What Speed?”

Hey, I bet I know what’s going on. Trump’s probably just holding things up a tad, until Pfizer agrees to label all those vaccine vials as the “Trump Vaccine.” Seems like a reasonable enough demand. I mean, it isn’t like there are lots of lives are at risk here, or anything urgent like that. 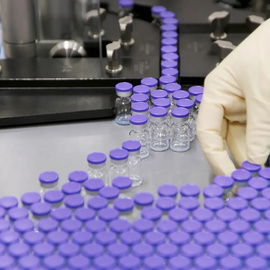 I had heard that. Little coverage so far - it appears to be getting out and people are seeing it occurring. The Governor of Illinois sent out a request for info. That made me wonder if the slow movement was aimed at democratic states, but Indiana has a similar problem as well. Pfizer says it has plenty of vaccine and gets its shipping orders from the FEDS.

Seems to me if we ever knew the facts behind a lot of these “situations”, heads would surely roll. Why am I always left feeling like we have been played by a bad deck of cards?

They want the name change and a kickback..

I was thinking Jared Kuntner was looking for kickbacks

Call me crazy but I have had this weird idea of a possible Russian hacking intervention into vaccine distribution. Why the infiltration of government systems if they aren’t up to mischief?

All governments that have the capacity spy on each other systems. It's a big stretch from that to claim that Russia is sabotaging our vaccine efforts. The media will always make us paranoid about any government that can compete with the US. This paranoid xenophobia is one type of sky fairy that we need to kill...

Russia has hacked into many of our most sensitive systems. Trump fired our cyber security head. Putin’s stated goal is to sow chaos in his enemies’ countries. Put those together and we have some ugly outcomes. You need to step off because it’s obvious you don’t know the situation on the ground.

@Killtheskyfairy "The situation on the ground?" You work in national cyber security? You have access to exclusive information? And don't you believe the US has the same attitude and actions to other competitors also? What you are doing is a religious-like substitution of Putin for the Devil. Someone who is supposedly capable of any evil in your mind. You have created a modern Sky Demon! So only believers in your xenophobic religion are allowed to speak? You want me to "step off" from using logic and atheist scepticism to examine your irrational, religious-type fears?

Nothing religious involved and I’m not responding to the rest of your Gish gallop because it’s obvious you have a persecution complex.

@Killtheskyfairy I never claimed to be persecuted. You are the one who is claiming that Putin is persecuting us. So perhaps you have the persecution complex yourself? A religious type paranoia? Moreover, merely dismissing someone's arguments pejoratively is not an adequate rebuttal. It merely highlights the weaknesses in one's claims.