Grocery giant Kroger, announced it plans to close more stores, this time in the Seattle area, after the city passed a $4-an-hour hazard pay mandate for grocery workers, drawing sharp rebukes from local officials and worker advocates, who point to the company’s record operating profits of more than $2.9 billion through the third quarter of 2020, while taking in an extra $1.2 billion in earnings compared to a year earlier during this deadly pandemic.

Why, I tell ya, these essential workers really have some nerve! I mean, you’d think that these folks would be content with the occasional celebrity TV commercial singing their praises, or some colorful billboard saluting their efforts - but NO!

I mean, do they actually believe that by putting their lives at risk by providing us with the necessities needed to maintain our daily lives in the middle of a deadly pandemic - that that entitles them to ask for a share of those massive corporate profits Kroger is raking in?

I’ll tell you, it’s a pretty sad day for America, when simple “lip service” and worthless “employee merit buttons” pinned on their work shirts are no longer enough, thereby forcing huge corporations to actually put their money where their greedy mouths are. Why, what kind of upside-down, Bernie Sanders’ type of world is that?

Besides, if huge companies like Kroger have to start sharing record profits with frontline employees, just how in the hell are they supposed to come up with the cash to fork over to pay CEO Rodney McMullen’s $21.1 million yearly salary, or to execute those huge stock buy-backs they’ve been busy pulling off?

Funny how, in the last analysis, it turns out that what Kroger actually pays its workers, really has less to do with the “company’s bottom line,” than it does with folks like “CEO Rodney McMullen’s bottom line.” 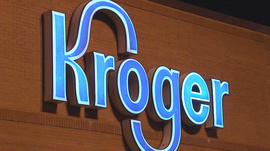 Kroger is one of the worst to work for. I say boycott their rich asses and make that CEO cry!

At one time when a list of the highest paying CEO's came out Kroger's CEO was one of the highest. Yet it was a small chain with little to show for itself. Could never figure out how this one guy made so much money when his brand was so lackluster.

"Essential workers" is a phrase created to override the truth of "expendable workers."

I call us sacrificial workers

Sad to see another company is just as greedy and heartless as Walmart.

I guess the rest of the country needs to boycott some Krogers!