Claiming "our state is not a prison camp,” the Republican-dominated North Dakota House of Representatives has moved to ban implementing face mask mandates, regardless of how severe future pandemics may get.

Gee whiz, "our state is not a prison camp?” All I can say is…really? Because, I was thinking North Dakota would make the perfect location for a prison camp, especially for folks like Donald Trump, Rudy Giuliani, Stephen Miller, and their merry band of “January 6th insurrectionists.”

Of course, I’m sure there will always be some folks who’ll wonder “just who in the hell would wanna live in North Dakota anyway?” Well, I believe the answer to that is - a lot of folks were simply drawn to the area because of the state motto, which is "North Dakota, Land of Lunatics!

Now, if you don’t believe me, just wait till these Republican politicians get around to passing their next “freedom-loving” legislation - which is prohibiting residents from performing that socialist ritual of covering their mouths, whenever they cough or sneeze.

Meanwhile, perhaps the best thing the rest of us can do to protect ourselves, would be to quarantine the whole frigg’n state. Of course, international law would also require a humanitarian Berlin-style airlift, to rescue any sane residents still trapped within the state. Naturally, we’d have to closely monitor those refugees for a period of time - given their close exposure to all those morons. 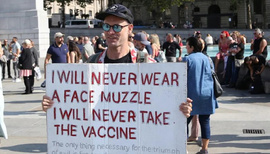 WOW!!! I live in California and via the internet I went to North Dakota to learn more.

Two days after House Republicans, by a 50-44[?] vote, pass the bill, businesses are already objecting to it. Repub leaders say the House will reconsider the vote. Reconsideration is parliamentary palaver for almost certain death to the bill.

I give everyone the right to do with their own body whatever they want. It is not right to make a law that many believe that could harm them, like force to not wear a mask as to making it illegal to not wearing one. Some also believe wearing a mask is more harmful than the covid. Both have a right to choose. It is Government that takes away human rights, and replace it with their dictatorship of privileges that is more harmful overall.

The issue is, your right to not wear a mask doesn’t override my right to not be infected by you. You can thump your chest and stomp your feet all you want.

The govt does have the duty to protect citizens in such situations. But any such actions must be temporary, and effective.

@Canndue
Being a citizens of concern. Health and the natural environment comes first. This UNjustice system handling of the covid, (where I know our children will do much better job next time) is not good enough . I only wear a mask very limitedly for respect of others differences who are over obedient to corperatism. My studies show the mask is more harmful than the covid.

That self-centered way of thinking has killed a half a million people in the US. Congratulations! Why not go and have drinks with all of your friends, then go to the local care homes and explain to them that their lives don't matter. Perhaps you could even get tshirts printed with "Fuck you" in huge letters. Wearing a mask DOES NOT affect your oxygen levels. I proved this with an O2 meter. Want life to return to normal? STOP SPREADING COVID-19

I do my best not to let covid world order effect my well being. Not stoping you from anything. Not being selfish, just being self serve first, so I can serve and help others better.

And try not wearing a seat belt. Or a helmet.

That is not the same. Are we going to closed down everyone and thing over every nasty virus that comes along?
Government and corporations would love that, take it to higher levels for their club and we are not in it.

@Canndue Protection from masks goes both ways, thus my frustration at people being selfish and childish about killing and sickening those in their communities.

@Canndue, @Castlepaloma Yet I have spent more than a half century on this planet and this is the first time I have seen widespread lockdowns.