After a congressional report found that many of the products made by the country’s largest commercial baby food manufacturers contain significant levels of lead, arsenic, cadmium, and mercury, the Food and Drug Administration (FDA) has finally agreed to urge companies to put limits on these toxins - this, after receiving considerable pressure from outraged parents and advocacy groups. Research indicates exposure to even small amounts of heavy metals at an early age may increase the risk of numerous health problems, including lower IQ, behavioral problems, autism and attention-deficit/hyperactivity disorder.

Gee, so you mean limiting things such as arsenic and lead levels in baby food wasn't already a “thing?” Guess that pretty much explains the existence of groups like QAnon and why 74 million people voted for Donald Trump in 2020. Hell, this sounds more like the plot of some low-budget, Hollywood horror film, than something our FDA ought to be dealing with in 2021. Perhaps its time someone tells the FDA they need to “get the lead out of it” and actually do something for a change.

In response, congressional Republicans are already calling this yet another example of governmental overreach, adding that forcing companies to lower arsenic and lead levels in baby food “will take away a child’s freedom to choose.” Besides, a little arsenic might toughen these kids up a bit,” adding “that's the problem with toddlers today, they’re way too soft.”

Republicans further argue that if parents are allowed to withhold life-saving vaccines from their children, then why shouldn’t they be free to feed their kids toxic metals also? I mean, kids might freak out when they learn they can no longer have their Kellogg's Frosted Mini Mercury Wheats in the morning. Besides, if we were to ban all heavy metal, then what’ll happen to groups like AC/DC and Black Sabbath?

Look, the bottom line here is, lead retards intellectual development in children, therefore enlarging the pool of future Republican voters. So, obviously - the GOP’s gonna fight this tooth and nail. Hell, toxic heavy metals were even considered part of the food pyramid under the Trump Administration. Besides, manufacturers are still gonna be free to use glass shards as extra filler in their baby food formulas, so what’s the problem? 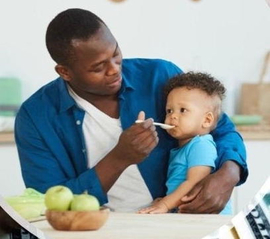 How about taking charge of your child’s health and provide whole food instead of Frankenstein crap. Easy enough to purée

Posted by SeaGreenEyezGreta Thunberg simplifies abortion in this brilliant chart.