Trump May Soon Be Relocating to New Jersey

Insiders say that former President Donald Trump and his team, may soon be “temporarily” relocating from his Palm Beach Mar-A-Lago resort - to his golf course in Bedminster, New Jersey.

Well, at least that’ll make him closer to Rikers Island - which will hopefully become his next destination. Not to mention, this move should drastically reduce his commute time for all his eventual upcoming court hearings. The fact is, the Trump’s have to keep moving, so no one can serve them papers. Perhaps Cher described it best when she sang - “Gypsies, Tramps, and Thieves.” In addition, I’m pretty sure that all of Trump’s Florida marks, have all pretty much been milked by now anyway.

Besides, Mar-a-Logo closes down every year just after Memorial Day, due to the hot and humid weather in South Florida. God knows all that heat and humidity must really do a number on Trump’s hairdo. So, I guess this pretty much makes Trump and company “climate refugees.” Geez, doesn’t that Palm Beach shit hole of his have any damn air conditioners? Anyway, I suppose about the only question remaining to be asked at this point is, will those Mar-a-Logo bed bugs also be relocating to New Jersey along with the family? 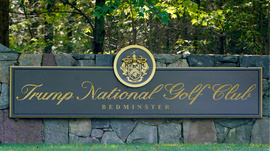 Humm interesting - New Jersey. Chris Christie and the bridge country. Wonder if there is a grifters tax break there. Hey I'ed break into my happy dance, (no one wants to see that), if the Donald were actually jailed - but I really doubt it will ever happen. He may be found guilty of stuff but fines will be all he faces. No different than the University and Charity fraud convictions. (I wonder if he had on an orange jump suit his body would disappear except for his hair).

Have fun Donnie at rikers

I would guess that the Melania isn't happy away from big city life and expensive shopping. There is only si much over mothering to be done as her little baby boy grows into his family's uncaring nature.

'Thought her boy toy was inNYC

@Canndue I was talking about her baby boy, Baronni (I stole that name adaptation from the evil, underling crow in Danger Mouse cartoons).
I did hear a story, prior to the first election, from someone who has a summer home in the Caribbean. According to that person, they knew another owner who lived close to one of the tRump's homes down there. So, take this as very unverified. Supposedly, Melania had many "private" parties without the Orange Menace.