As promised, former President Donald J. Trump has launched what the folks at Fox News are calling “a new communications platform," although critics say it is little more than a blog. The website is really designed as a money-making/fundraising enterprise with a full propaganda and donations page. The site itself only permits one-way communication - and only Trump is able to post anything, such as words, images, or videos. Meanwhile, supporters are limited to reposting Trump’s rants to either their Twitter, Facebook, or Instagram accounts - if they so choose.

Gee, so Trump’s starting up his own blog is he? Why, how revolutionary! This should really appeal to all his followers who are still using a Commodore 64, AOL, or the Netscape browser - or frankly, anyone who simply wants to return to those days of yesteryear, when cellphones were larger than a brick.

And, to think it only took Trump’s crack, high-tech team just four months after his ban from Twitter, Facebook, etc., - to realize that all Trump needed to do was to simply start his own blog and he could then post virtually anything he wanted without restrictions. Genius, I tell you!

Why, I’ll bet all this Trump media platform talk has poor Mark Zuckerberg pissing his pants. And, as we all know, Trump can get quite excited over the thought of someone pissing their pants, but that’s beyond the scope of this conversation. Gee, wonder who the hell designed his website anyway? From the looks of it, my guess is that it was either Eric or young son Barron.

Of course, Trump would like to think of this website as his personal Twitter - “but only for me!” That’s because everyone else is totally blocked from responding. And I get that, because if only Trump can post anything, that will ensure the website will have only the “best words” on it.

The site does reportedly have good security though. In fact, for verification - they require the name of your bank, your checking account number, your pin, and your bank's routing number. Then, all you have to do is simply log on, and your bank account will be immediately drained - just to make sure you’re really serious about supporting the former President.

As an added benefit, folks who “subscribe” will be immediately notified if there’s anything new in the “Trump World.” Wow, wonder if we’ll be notified when Trump’s finally been arrested and indicted? Anyway, currently the "Like" button is not working, which is fine with me, because I’ve been holding out till they enable the "Despise" button. 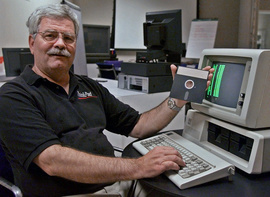 Thank you my friend!

Yeah, I think I'll pass. The only way I'd bother is if I was a reporter or 'pundit' & I could write it, & the emotional injury, off as a business expense. I'll still hear about most of his ravings 2nd hand, but I sure won't go out of my way to look for him or make it appear as if I support him.