We rely on members to let us know when posts contain content that violiate the community guidelines. The most common reason that content gets flagged is that it contains dehumanizing or trolling/baiting text. Getting too many flagged posts will result in account termination.
Visit Group Join Group
1 7

According to the Stars and Stripes, the younger brother of disgraced former Trump National Security Adviser Michael Flynn - who recently called for a military coup at a QAnon conference to overthrow President Biden - is now assuming command of U.S. Army in the Pacific. Lt. Gen. Charles Flynn took a lot of criticism earlier this year, because he was in on the decision not to allow the National Guard to help police while they were being overrun by the rioters in the Capitol on Jan. 6th.

OK, so let’s see here - former Trump National Security Advisor Michael Flynn called for a military coup to overthrow the US government at a QAnon conference, and now his brother has been promoted to Commanding General for the US Army in the Pacific? Gee, who knew that another Flynn brother was the only other choice we had?

Now, in my humble opinion, if we absolutely have to promote Gen. Charles Flynn to something, then why not put him in charge of the “Space Force?” I mean, who better to guard against those Jewish space lasers - than one of the Flynn brothers? And, if needed - we’ll always have Marjorie Taylor Greene on hand to ensure Flynn stays up to speed on all the latest info QAnon can provide - on Jews and lasers.

Besides, look at it this way - at least now he’ll sure be one helluva long way from the Capitol. Now, for those of you concerned about him being “Commanding General for the US Army in the Pacific,” well I normally would be concerned about this also. But remember, the Army is a land force, and they’ve put him in charge of an ocean, so I’m sure we’ll be just fine. 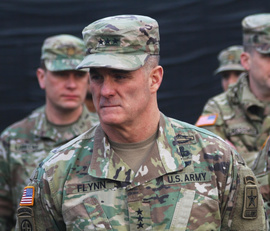