The Daily Mail is reporting that Jerry Falwell Jr asked a Virginia court to dismiss a $10 million lawsuit filed against him by Liberty University, over his scandalous departure as leader of the conservative evangelical school his father founded, Falwell claiming he had no duty to tell the university about his private matters. These accusations included excessive drinking, as well as numerous liaisons between his wife and a “young pool boy” named Giancarlo Granda, in which Falwell Jr. often participated as a voyeur.

Wow, now that’s one of the best Bible stories ever! I guess folks don’t call it “the Good Book” for nothing. So apparently, Jerry Jr.'s wife and the young pool boy were role-playing “Adam and Eve,” as the creepy serpent looked on. And, while she didn’t actually give the pool boy an apple, she did reportedly give him a Mac laptop - as a token of their appreciation.

Now, this begs the question, exactly what Bible verse covers pool boys, hot tubs, drunken Pastors, their wives, and all the secret sexual proclivities of the clergy? I believe it might be in the Book of Dude-a-Ronomy, verses 7:11 - which proclaims "And thou shalt observe thy wife, banging thy servant in a jacuzzi, and that shall provide thee with extreme pleasure.”

Of course, Liberty University always knew what vile, disgusting creatures the Falwells were, but didn’t really care - until their “activities” became public. Their attitude was always “God forgives us, but He thinks the rest of you are just assholes.” Anyway, they say the shortest verse in the Bible is “Jesus wept,” but I think in the case of the Falwells and Liberty U, it might be more like “Jesus snickered.” 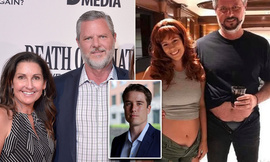 The decision decades ago by the GOP, led by Ronald Reagan, to ally themselves with the so-called 'moral majority' was the beginning of the end for this political party. In lying down with these hypocritical dogs, the Republican party is now infested with fleas.

@johnnyrobish Thanks, And thanks for your post! I think it’s safe to say that the old guard Republicans who stood for church-state separation are extinct. Here’s a quote from one of their dinosaurs:

“Mark my word, if and when these preachers get control of the [Republican] party, and they're sure trying to do so, it's going to be a terrible damn problem. Frankly, these people frighten me. Politics and governing demand compromise. But these Christians believe they are acting in the name of God, so they can't and won't compromise. I know, I've tried to deal with them.“
Senator Barry Goldwater, Jr.

Fallwell Sr. was a disgusting human being & I couldn't believe how much he was fawned over by the Media when he passed, (tho not by everyone, see below), & even before no matter the many vile things he said. His son was a twisted chip off the old hypocritical block.