Lara Trump Says Americans Should Take Up Arms Against Immigrants

Lara Trump is sparking some serious controversy after appearing on Judge Jeanine Pirro’s Fox News show this past Saturday, suggesting that Americans living along the southern border had “better arm up and get guns and be ready, and maybe they will have to take matters into their own hands.”

Now, say what you want, but I have to admit Lara has a point there. After all, we all know those desperate immigrant men, women, and children, trying to escape violence and poverty in their own countries and seeking a better life - are all armed to the teeth and looking for blood. And the January 6th insurrectionists? All tourists, out on delightful family picnics.

So, we have another day, another Trump - trying to incite more violence and insurrection. Now, my suggestion is, if Lara is really all that concerned about our border, perhaps she ought to leave her gated compound and head right down there to show those “half-minutemen” she’s been egging on, exactly how this vigilante work is all done. Of course, being extra careful not to break a nail in the process.

Anyway, one can’t help from being impressed by people like Lara’s pro-life Christian values, such as shooting unarmed immigrants - because as we all know - that’s exactly what Jesus would have done. That said, I actually try and find some comfort in the assumption that no “sane person” would ever take advice from someone who married Eric Trump, but then it occurred to me that her target audience - isn’t really “sane people.” 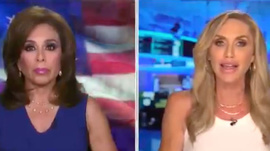 A coke whore talking to a wino isn't the place to get coherent conversation..

those two are Kray KraY

Which one? Oh, nevermind!