A Maryland man named Thomas Patrick Connally Jr., has been arrested for making a series of unhinged, violent threats against Dr. Anthony Fauci, calling him “a sickening, compromised satanic freemason criminal,” a “disgusting piece of elf garbage,” and promised Fauci’s wife and daughters would each be shot in “their disgusting pig snouts, while you watch.”

OK, but other than all that, I think we can all agree Fauci seems to be a pretty good doctor. Not surprisingly, Republican leaders were quick to jump to Connally’s defense, pointing out that Connally was simply expressing “COVID-19 policy differences” he has with Fauci, and the Libs are once again trying to make a big deal out of nothing, just like they’re doing with their investigations into all those “happy, fun-loving tourists,” who visited the Capitol Building on January 6th.

Of course, defenders of Dr. Fauci wanna see prosecutors “throw the book at Connally,” but I think with someone as whacked out as Connally appears to be - you might wanna throw the whole damn library at him instead. Just don’t make sure it’s not the Trump Library. Now, is it just me, or does the new MAGA mantra seem to be “I believe everything I read on Twitter, Instagram, and Facebook - therefore, you need to die.”

Now, on a personal level, I’ve always made it a point to never engage anyone in conversation who brings up topics such as “the Freemasons, Bill & Melinda Gates planted microchips, Satanism, The World Bank, or the Rothschilds.” It’s a clear sign these folks have been off their meds for a while. So, what’s next? Expect Connally’s lawyer to argue this anti-vaxxer nut case must be immediately released, so he doesn't catch COVID-19 while in jail. After all, be a damn shame to lose a “patriot” like Connally to a disease he doesn’t even believe exists. 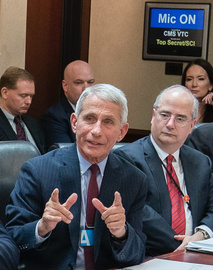 Connally is a mental defective. He is also a product of the American class system. Enough said.

Yup, just kill the messenger and listen to Hannity and Carlson, cuz they KNOW all about infectious diseases...

Just nasty, he is a descent caring person

In my area I have heard Trumpers call Fauci the "Democrats doctor." Their ignorance will not let them remember when Fauci was liked by former Republicans and Trump was not calling the shots.

No he pushed HydroxyCloroquine as The cure..

@Charlene Yes, Trump did that. Not Fauci.