Now, I normally don't repeat anything God tells me in private, but this time Sarah - He’s saying “Hell NO!” I mean, forget about God, not even Tina Fey wants you to run. In addition, political analysts say Sarah is well past her prime, given it’s been a full 13 years since she was once considered to be “the very cutting edge of crazy.” Perhaps, but in my opinion, no one should ever count Sarah Palin out in a “crazy contest.”

Besides, who can blame her for wanting to run? Imagine if you were Sarah Palin, and you saw a lying, thieving, con-artist, of a grifter like Donald Trump, not only win the Republican nomination, but also grab the whole kit and caboodle - wouldn't you be thinking "Why not?” I mean, it sure beats the hell out of hawking things like “happy birthday video wishes” for $199 a pop, like she’s been doing on her website these days.

Fact is, today’s GOP stars like Marjorie Taylor Greene, Matt Gaetz, Lauren Boebert, and Donald Trump, make folks like her and Michelle Bachman look like the “Rhodes Scholars” of the Republican Party. And, while I have nothing but disdain for Palin’s politics, and have always considered her a complete moron, I have to admit her abilities to field-dress a moose, or shoot wolves with a high-powered rifle through a telescopic lens, all from the comfort and safety of a helicopter - are quite impressive.

That said, my question is, how is it every time some Republican claims God spoke to them about politics, nobody ever seems to question their sanity? Given the insurrection and everything else that’s come down this past year, you’d think that’d be the first question. I mean, isn’t it pretty obvious the Republican Party has become the “WWE of politics?” That’s right, the GOP is flat-out “Loony Tunes.” Which leaves the rest of us wondering, when do we get to hear the "That's all, Folks!” part? 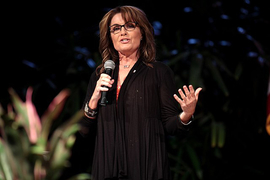 Panama, I've read, is seeing a lot of people from other countries moving in. Hmmm. Compared to the crazies now running amok in the GQP, Palin's sickness is of the out-patient type, with the others needing to be in those in-patient padded rooms of old. Still, it would be disturbing if the Alaskans were to forget that she went deer hunting with a gun she'd never shot previously, and elected her.

"Still crazy after all these years..."

Nutball rides again but this time not number one