We rely on members to let us know when posts contain content that violiate the community guidelines. The most common reason that content gets flagged is that it contains dehumanizing or trolling/baiting text. Getting too many flagged posts will result in account termination.
Visit Group Join Group
3 13

NRA Cancels Annual Meeting Over of Surge of COVID in Texas

The New York Times reports that the National Rifle Association (NRA) announced it will be canceling its annual meeting in Houston, after NRA leaders consulted with medical professionals, local officials, and sponsors over concerns about the rising number of COVID cases, fueled by the Delta variant in the area.

Gee, you mean to tell me that the NRA is suddenly becoming concerned about people dying? Could Wayne LaPierre and his henchmen be going soft? I doubt it, more likely gun manufacturers just don’t feel confident enough to try and compete with a very deadly virus - in a killing contest. NRA bosses probably feel that by canceling the convention, they’ve “dodged a bullet.”

Personally, I don’t see any reason to cancel the meeting. Why, I haven’t seen any evidence that a handgun or an assault rifle can come down with the coronavirus. Besides, with all those guns around in the hands of who knows who, it shouldn’t be all that difficult getting shot in the arm. Of course, getting the vaccine is a whole other thing, but I digress.

The thing is, the NRA is just about bankrupt and this was supposed to be a big fundraiser. How the hell is NRA chief Wayne LaPierre supposed to buy himself more custom-tailored suits? You don’t expect the poor guy to shop at Men's Wearhouse, do you? Of course, if it were up to the Libs, why they’d have our Mr. LaPierre, sitting in LaPrison by now.

So, what is to become of the NRA anyway? I mean, this is two conventions in a row now that had to be canceled. Who knew the NRA would join up with the “Cancel Culture?” Now, I’m no expert, but I think there’s a very simple “pro-gun solution” here - why, just shoot anyone who shows up at the convention, who tests positive for the virus. Problem solved! 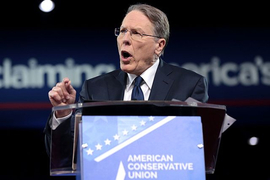 I volunteer for that job, and when my hand/arm gets sore from the recoil, I will swab the floors!

Think about cleaning the floors, people get paid for that, let them do it. You will be tired and should not be exerting yourself that way.

@dalefvictor I just figured there will be so much gore I should pitch in....

Don't forget..weapons Aren't allowed at NRA conventions. Which I never understood, cause ain't they all the "Good Guys" and "True Patroits"?