We rely on members to let us know when posts contain content that violiate the community guidelines. The most common reason that content gets flagged is that it contains dehumanizing or trolling/baiting text. Getting too many flagged posts will result in account termination.
Visit Group Join Group
8 11

During an interview on Fox News, Rep. Brian Mast (R-FL) told host Jason Chaffetz that Joe Biden deserved to be punished for his actions during the U.S. military's withdrawal from Afghanistan, demanding Biden be immediately removed from office for “treason and schizophrenia.”

Wow, apparently calling President Biden "Sleepy Joe,” just doesn’t seem strong enough for the Congressman. And then, claiming Biden should be removed from office for “treason and schizophrenia?” Why, that’s basically like accusing Biden of “governing like a Republican.” What a horrible accusation to make against someone!

I’ll tell ya what, this Rep. Brian Mast appears to answer that age-old question of “what do you get when you put a white supremacist and skinhead - in a three-piece suit?” Either that, or one of the “Coneheads” has somehow managed to get themselves elected to Congress. Now, I was gonna refer to Mast as an “attack dog,” but a “yelping chihuahua” actually seems a bit more accurate.

The truth is, I’d be quite surprised if Mast could even spell “schizophrenia,” let alone know what it means. Hell, forget “schizophrenia,” let’s instead discuss “selective amnesia,” because Republicans appear to have “selectively” forgotten it was that “Orange President” who negotiated our withdrawal with the Taliban, and who freed 5000 terrorist combatants, who now rule in Afghanistan.

Of course, as we all know, Republicans aren’t really all that fond of being confused with actual facts. If they did, they wouldn’t have elected a president who speaks on a “fifth-grade level.” Truth is, if Rep. Mast really wanted to find someone deserving of impeachment, a good start might have been Florida’s murderous, anti-vax governor - Ron DeSantis. 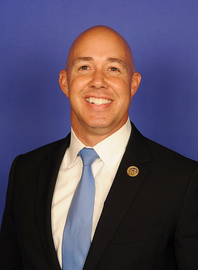 Kissing up to the massive number of bozo idiots living here, he is. The GQP folk have to sound increasingly crazier in order to get any attention.

I cannot believe Floridians are not rising up against the daily death count these idiots are allowing/encouraging. Have they no pitchforks?

Florida did not "elect" this guy. Former Gov. Scott removed 98,000 people named Johnson from the voting lists, using,as his excuse, one fellow who was/is a felon, whom they said they could not find. So, obviously, one just cleans them all out, because that last name is apparently quite associated with being NOT FUCKING WHITE! DeathSantis still only won by some 32,000 votes.
Not that there are not massive numbers of bozo idiots living here.

@BirdMan1 is the Rep from Floriduh?

Florida...you're either in Miami or Alabama. Sunburnt brains are the norm here.

The largest military evacuation since Dunkirk and the Republicans are bitching.

The congressman is an idiot!

We stayed in Afghanistan well beyond any reasonable amount of time. The reason for going into Afghanistan was to capture or kill those who took part in planning and supporting 9/11, as well as the US embassy bombings in Africa. It seems to me that when Osama bin Laden was finally killed in 2011, that would’ve been a good time to withdraw.

And so it took two more administrations before this finally happened. In the meantime, despite all of the training and support given them, the Afghan military refused to put up a fight and defend the capital against the Taliban. This abandonment of the battlefield and failure to perform their duty led directly to the chaotic withdrawal.

Adding to the confusion is the lack of personnel in the state department and other agencies tasked with carrying out this mission..... Republicans have been stonewalling conformation of biden appointees leaving them short staffed...

@Redneckliberal A lot of State Dept. people left during the last administration as well, 45 did a lot more damage to our institutions than most people realize.

@Redneckliberal It will be a generation before our institutions are fixed, scary how much damage Putin did.