We rely on members to let us know when posts contain content that violiate the community guidelines. The most common reason that content gets flagged is that it contains dehumanizing or trolling/baiting text. Getting too many flagged posts will result in account termination.
Visit Group Join Group
8 9

Former Trump National Security Adviser Michael Flynn, who was fired and then prosecuted for lying to the FBI about his contacts with Russia before being ultimately pardoned by Trump, is now sliding further into the QAnon conspiracy world, telling the hosts of an online show dedicated to COVID and election fraud conspiracies - that he has heard the “Deep State” is attempting to “sneak coronavirus vaccine into salad dressing.”

Now, I have no idea where Gen. Flynn got this information, but my guess is it was probably a text from Mike Lindell or Rudy Giuliani, alerting him to the “hidden dangers of salad dressing.” Or, it could have been Nicki Minaj for all I know. After all, she does have another cousin who has a friend in Timbuktu. Word on the street has it the “Deep State” will initially start with “Ranch Dressing” to vaccinate the cowboys, then move on to “Russian Dressing,” to get the rest of Trump’s supporters.

Anyway, I hate to rain on Gen. Flynn’s conspiracy theory parade, but I’m pretty sure that most “salad eaters” are already vaccinated. Let’s get real, if the vaccine is hidden in salads, then no Republican I’m aware of, is in any danger of ingesting it. Hell, as far as I know, there’s never been a verifiable, documented observation of a Trump supporter - actually eating a salad. Just as long as they don’t try and sneak it into gravy or the ink supply for tattoo parlors, most Trumpsters should be safe.

Frankly, it’s getting harder and harder to keep up with all of this “Deep State” stuff. Thank goodness we have folks like Gen. Flynn to explain it all to us. I mean, we have COVID salad dressings, dewormers, fetal tissue, magnets, Bill Gates’ 5G microchips, space lasers - geez! Not to mention, I heard the Biden Administration is now planning to try and force “patriots” to finish all the vegetables on their plates - before they can have their desert.

Oddly enough, when I first heard about all of this, I had just sat down for lunch at my favorite little outdoor cafe in Santa Monica, and had ordered a nice house salad with their homemade “Balsamic COVID Vaccine Dressing.” The problem is, I only ordered the dressing on the side, so I have no idea if that means I’m now considered fully vaccinated. As for Gen. Flynn, if he ever does get reindicted for anything, he’s definitely just laid the perfect groundwork - for a future insanity plea. 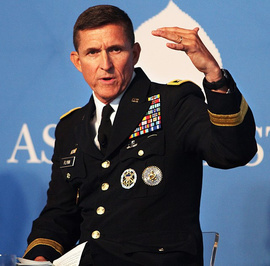 General Flynn, one of the most honest and straight forward treasonists there is. Shoot this traitor, a Judge once told him he was going to rule for treason in one of his court cases. Flynn decided he would take a different tac.

All this nonsense when Bannon says he and Trump created the "Deep State." I believe it coz if it was not so they would be dead by now. Wait! Maybe Flynn protects them. Salad anyone?

Can we arrest this fucking Nazi already?

Makes You wonder what Little it Takes to become a “ General “ ?

Like any business, it just takes a lot of sucking up.