As reports continue to come in about hospitals across the country being overrun with unvaccinated COVID patients, Tucker Carlson took to the airwaves to “inform” his audience that it isn’t the unvaccinated who are plugging up our nation’s hospitals, but actually all the immigrants President Biden is letting into the country. Immigrants, whom Tucker claims, are promised free healthcare - from the moment they arrive.

Now, some of you may ask, where the hell is the FCC when folks like Tucker are allowed to spew these unfounded, vicious lies that are being sent out to tens of millions of people? Well, the answer is, they’re quite busy. That’s right. They’re busy policing. Making sure no errant nipples are showing up on your TV screen, or some random "curse word” that didn’t get bleeped, gets sent out into the airwaves for the general public to hear.

Of course, there are still lots of regular folks who are not part of the Fox News or Trump cult, who are not all that pleased with Tucker’s racist, anti-immigrant antics. In fact, word has it Tucker’s considered such a disgusting sleazeball by some, that even the makers of “Tucks Medicated Hemorrhoid Pads,” are reportedly terribly embarrassed to be so closely associated with his name. 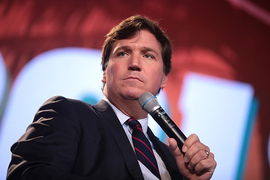 So he creates a major problem (by denigrating needed vaccines) & then blames it on the totally defenseless,......what a "man"!!!!!!

Maybe the Tuckster Is a suppository for Hemorrhoids?

Except that anyone watching the news has seen that around 80% of those actually dying these days are the anti-vaxxer Republicans with the rest being vaccine-resistant non-whites. Immigrants dying from Covid couldn't possibly amount to 1%. If anything, Carlson is killing off his own supporters with his lies.

Well, we all need a hobby…