Even though it’s only October, the crew over at “Fox and Friends” have already kicked off their annual “War on Christmas” indignation series. Host Brian Kilmeade started the festivities off, by warning that liberals are making sure your Christmas gifts will not arrive on time (if at all) this year, because Biden’s unemployment benefits have made American workers far too “lazy” to return to work.

Wow, you mean they’re actually running the annual “War on Christmas” scare in October now? What? So, does that mean we’re just supposed to completely ignore the “The War on Halloween” this year? Why, you don’t wanna mess around and piss off the Headless Horseman of Sleepy Hollow, or the next thing you know, he’ll be trying to behead old Santa, or barbecue himself a reindeer or two.

Anyway, putting all of that aside, I think it’s time we paid homage to all the fallen from the “Wars on Christmas” that were fought in seasons past. Why, I’m even buying “War Bonds” because I know war takes a terrible toll, and Fox News is already reporting horrific losses. I believe the first to fall was Frosty the Snowman. Now, to be completely fair, his demise wasn’t really combat-related, but simply collateral damage - in that he basically melted when the temperature rose a few degrees.

Of course, the message Fox News is really trying to convey to evangelicals is that these damned liberals would love to have you believe that other people’s religious holidays are equally as important as yours. Why, some even have the unmitigated gall, to dare to walk right up and wish you a “Happy Holidays.” Oh, the horror of it all is almost enough to make you shake in disgust!

Why, it’s enough to make any Donald Trump-fearing Christian wonder “what’s next?” Libtards marching through our streets sporting signs saying “All Holidays Matter?” Why, how dare these insensitive bastards! Hell, any Republican who’s not one of those damn RINOs knows only Christian holidays matter! “What the hell do they think we fought the Crusades for?”

Now, my word of advice to these professional evangelical victims would simply be “hey, calm down!” The last I looked, Christmas is still a federal holiday, and you’re still free to worship as you please. I mean, it isn’t like anything is being taken away from you - like basic voting rights for people of color, or a woman's right to control her own body. So cheer up, I’m sure Fox News will figure out lots of cool ways for you guys to portray yourselves as victims again.

*If you’ve enjoyed what you’ve just read, consider joining me at 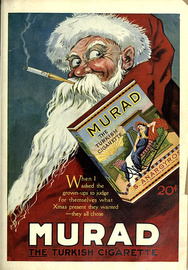 Why is it that the only people I hear talk about this is the people on right wing media, no one else seems to care.

This year I've decided to go for Christmases jugular, I'm calling for an all out attack on Santa's castle! ENOUGH OF THE COAL GIVER..IT'S TIME TO TAKE BACK DECEMBER FROM THIS USURPER DRESSED IN RED, AND REINSTATE THE REAL HOLIDAY SPIRIT SATURNALIA!!!
STOP the STEAL!!!!!!