Televangelist and “End Times” pastor Sharon Gilbert appeared on the Jim Bakker Show, claiming that shortly after she got married, an alien demon appeared in her bed, posing as her husband and tried to have sex with her. When she refused to believe it was her husband, it then claimed to be Xerxes - an ancient ruler of the Achaemenid Empire. At that point, she invoked the name of “Jesus Christ,” and the alien then revealed itself as a reptile along with a gang of gargoyles - at which time they all high tailed off.

Now, laugh if you want, but the way I understand it, this type of phenomena appears to be happening rather frequently in certain circles. Fact is, incidences of alien reptiles impersonating husbands of evangelical women in order to have sex with them, is apparently becoming more of a pressing issue with each passing day. A crisis which is being completely ignored by the mainstream media, I might add.

Well, all I can say is, thank God she had the wherewithal not to have sex with the damnable beast. I mean, can you even imagine what an insane divorce court proceeding that might have turned out to be? Anyway, I can just visualize her bravely confronting the beast, yelling out that old biblical phrase at the top of her lungs "Get thee behind me Satan! And, for heaven’s sake, how about using some lubrication this time!"

Of course, we all know that Rev. Sharon Gilbert is nobody’s fool. She knew there was “no possible way” this could have been her husband, because whatever this thing was - it actually wanted to “have sex with her.” No way that could have been her “Derek.” Now, I’ve seen her husband on their SkyWatchTV show, and my guess is that having sex with a lizard instead of Derek Gilbert - could only be considered an upgrade. But who am I to judge?

Of course, as we all know, Rev. Gilbert is just making all of this shit up. The truth is, as any herpetologist will happily tell you - no self-respecting reptile or serpent would ever wanna have sex with anything that’s actually more cold-blooded than it is. After all, alien demon lizards, do have their standards you know. 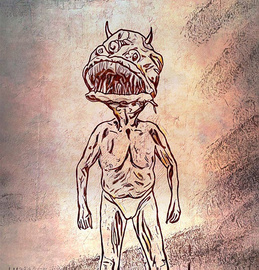 Back when there were State Hospitals, my aunt worked on the "middle-aged woman" ward, which was wall-to-wall like this.

I got very, very drunk on a works night out recently, but fortunately I have the powers of recognising such daemons before passing out.
I did see a few wandering about in the early hours though. Ah, Scotland on a Friday night.