After a homeless man with mental health issues set fire to the Fox News Christmas tree, folks over at Fox have been losing their minds in rage and anger, with Tucker Carlson demanding that the Department of Justice track what he feels is an epidemic of terrorist attacks on Christmas trees across the land.

Wow! You know, I actually saw that video, and I do have to admit that damn tree went up in flames faster than a Swanson TV dinner. On the other hand, let’s get serious here. Now, I’m certainly no detective, but I think if some terrorist really wanted to commit a hate crime over at Fox News headquarters, why would they bother burning down a fake Christmas tree, when they could instead set Tucker or Hannity on fire?

Anyway, I don’t know about Tucker’s claim that there’s an epidemic of Christmas tree burnings across the nation, but I do know this - a helluva lot of people have been burning yule logs. And, the way I see it, that ought to count for something. You know, it’s rather telling when those Fox News folks seem to be much more upset about a fake metal tree burning than they are about a cross burning.

Besides, on a positive note - now all the Fox News personalities will have something new to be totally outraged about during this year’s “War on Christmas” season. After all, we know there’s nothing on this good earth that MAGA Republicans love more - than being cast as victims. This is their chance to show the world that you just don’t mess with Fox News and the “Ebenezer Murdoch family” during Christmas.

Why, to hear the all hysterical folks at Fox tell it, this burning tree incident might just be even worse than that horrific “Bowling Green Massacre.” Which is odd, because Fox’s “Christmas tree” was really nothing but a bunch of metal scaffolding, with sawed-off pine branches attached with chicken wire, along with a few ornaments. This isn’t exactly like losing the National Cathedral folks.

So, now - everyone’s all pissed off about the tree fire, but has anyone even considered that perhaps this poor homeless fellow, was so upset that he missed the official Fox News “tree lighting” observance - that he decided he’d create his very own personal “tree lighting” ceremony? Either that, or as the former guy might suggest, “maybe this fire happened - because Fox didn't rake the floors.”

Frankly, if I were defending him, I’d take the same approach the lawyers who defended the MAGA rioters took. Why, I’d claim this “misunderstood arsonist” was simply a peaceful tourist visiting the area - who found himself viciously attacked by a hostile, metallic tree contraption. Then, in the spirit of “stand your ground,” he burned that vicious tree right down to the ground. That’s right, it was “self-defense.” I rest my case, your honor. 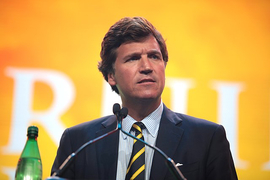 I thought the flames had just jumped from their burning cross .

A person with mental illness was blamed, sounds like an inside job to me.

Unbelievable what a snowflake moron, they pander to the unstable

One of these days Fucker will disappear up his own backside chasing a Fux new shit story.