Wow, that sure sounds a lot like what our former president might classify as “she's got blood coming out of her…whatever!” Now, I have to admit my first reaction was to wonder if perhaps she might have grown up in a state that had completely banned all sex education. Then, I became concerned for her well-being, wondering what would happen to her, if she were to accidentally wander into a large room full of vaccinated people? Would she bleed to death?

Now, she says she won’t see a doctor for this because she knows the medical establishment won’t believe her story, and I certainly think she’s correct about that. On the other hand, maybe someone ought to explain to her that perhaps if there were more than just one person - out of the 331,000,000 people living in the US - complaining about bleeding when they’re around vaccinated people, the CDC might be more motivated to look into it.

Anyway, all that aside, I wonder if she realizes what a terrific, marketable talent she has here? I mean, she could simply hire herself out to stand at the entrance of any establishment that requires people to be vaccinated. Then, as they walk past, if she doesn’t start bleeding - they don’t get admitted. Not to mention, that as an actor, how perfect she’d be to play a character in a “period piece.” Why, now that I think of it, that may very well be how “Flo from Progressive Insurance” got her gig. 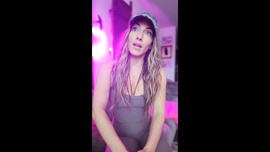 Thought the hedgehog was dead..

Lemme guess, she gets near one every month…

Deluded. An ignorant deluded person trying to make a buck and remain popular by spreading fake info that she knows some will gobble up instantly.