A mammoth cargo ship believed to be carrying thousands of Porsches and Bentleys, is on fire and drifting off the coast of the Azores after its 22 crew members had to be rescued from the vessel. Dealers say should the cars become a total loss, it may take another six months for these “special order” vehicles to be delivered to their wealthy patrons.

Now, I’ll be the first to admit that as soon as I heard that a ship had thousands of cars on fire, I immediately thought “oh, they must be transporting Chevy Bolts.” Sadly, these are Porsches and Bentleys folks. Why, this is truly a tragedy of first-world proportions! Talk about “The Bonfire of the Vanities.” One thing’s for sure, if this ship eventually sinks, the wealthy are definitely gonna need another round of government bailouts. After all, let us not forget - “Luxury Cars Matter!”

That said, I get it. Why, it’s enough to make some highfalutin “Captain of Industry” cry right into their Hotel Casa del Mar morning “Dom Pérignon mimosa.” Such a tragedy! I mean, you have 1,100 specially ordered Porsches going up in flames. That means 1,100 wealthy snobs may have to wait another 6 months before they can drive that new vehicle which is designed to accurately convey their social status to the rest of us. We can only hope that a new round of Republican tax cuts will help to soften the blow.

Anyway, sending out all my “Thoughts and Prayers” to these tragic “victims.” Of course, they’ll always be folks who’ll take their cue from Marie Antoinette, and say "let them drive Chevys!” These folks will probably claim the vehicles likely committed suicide in a mass protest against monopoly capitalism. Which brings us to the subject of just what did cause this fire? Now, I don’t like to start rumors, but word on the street has it the new “Tesla Electric Submarine” was spotted lurking in the area, eyeing this ship full of Porsches and Bentleys through its Ultra 8K periscope. On the other hand, it goes without saying Fox News is gonna claim the fire was actually started by the faulty battery in Hunter Biden's laptop.

Whatever the cause, Wall Street’s pressuring Volkswagen - who owns both the Porsche and Bentley brands - to make some serious changes, because its pretty obvious their luxury car sales have been “sinking.” Meanwhile, Hollywood is considering doing a film about the disaster called “20,000 Porsches and Bentleys Under the Sea.” It’s a film about angry luxury car buyers who complained that when they finally received their vehicle, instead of experiencing that “new car smell” - they got a “dead fish smell” instead.” Of course, let’s not forget that luxury car buyers aren’t the only victims here. You can bet a helluva lot of the rats onboard are mighty pissed at themselves for not picking a different ship to hook a ride on. 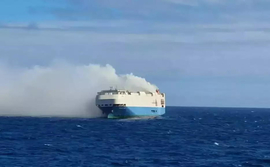 Yup...sending thoughts and stares to the owners, poor babies won't be able to flaunt their status in their exclusive gated communities. How ever will Richie and Rhonda Rich ever drive to the Country Club in Last years models?