It has recently come to light that during an October 2021 deposition in a lawsuit against his company by protesters roughed up by his security team at a Cedar Rapids campaign rally, Donald Trump was asked about encouraging his audience and security personnel to “knock the crap” out of any protesters who might try to pelt him with “tomatoes and fruit.” Trump then went into a bizarre rant about how extremely dangerous thrown fruits are, claiming “tomatoes are bad” and “some fruit is a lot worse.”

Wow, this makes me believe Trump actually thinks “Attack of the Killer Tomatoes” was a documentary. Who knew fruit posed such a danger to our cherished political leaders? Now, Teddy Roosevelt was shot by a bullet during a rally, yet he still managed to finish his speech. All I can say is, thank goodness he wasn't hit with a tomato. Why, that might have changed the entire course of history. We need to take action now, before Trump’s motorcade gets attacked in a “drive-by fruiting.”

Frankly, I think the obvious solution is a “National Fruit Registry,” with a stamped serial number that can identify every damn tomato. That, along with legislation designed to effectively close down these murderous Farmer's Markets where these horrific weapons are being readily sold to practically everyone. I mean, at the very least, there needs to be a 3-day “cooling-off period,” before anyone is allowed to take possession of the fruits and vegetables they’ve just purchased.

Of course, I’m sure you “libtards” all think Trump is just a “fruitcake” who has gone completely “bananas,” and that the second amendment guarantees every citizen the “right to bear fruit.” That means, before anyone can be arrested for throwing fruit at Trump, they first have to be read their “Carmen Miranda rights.” Now, what I’d most like to know is - if Donald Trump doesn’t like fruit thrown at him, how does he feel about rotten eggs?” 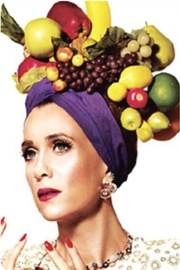 Yup! I remember avocados being affordable!

I hope this is a new trend down there in Texas. Put that bastards face on everything that went up in price due to his stunt!

What is it with Republicans and produce? Remember when the elder Bush said he hated broccoli? And now Trump. Anyway who give a flying f____ ruit?