Shortly after declaring bankruptcy to avoid paying court-ordered restitution to the Sandy Hook families he had categorized as "crisis actors,” InfoWars’ founder Alex Jones took to the airwaves in an angry meltdown, to shame viewers for not spending enough money at his InfoWars store. In his rant, Jones said unnamed forces are "waging a war against you and your family" through "inflation and collapse,” and that he and Roger Stone are on the front lines fighting for you. Jones then added that "This is life and death" and "This is all-out war, so go to InfoWarsStore.com and get amazing products. If you don't support us, you're helping the enemy!”

Well, I just checked out the InfoWars store for myself, and I have to admit you won’t find a better place to shop, assuming you’ve been diagnosed as a “paranoid schizophrenic.” Folks, Alex Jones not only sells “crappy junk” in his store, he also peddles “conspiracy crap” over the airwaves, and let’s not forget he’s “full of crap” as well. My friends, that’s what’s known as a “crap trifecta,” which frankly - ought to scare the “living crap” right out of you.

So, Jones says “this is war” does he? Why, who knew the best way to protect your family from these deviously woke, gay, progressive, libtard, George Soros-financed plots for world domination - is to buy his 5-gallon tactical mac & cheese buckets, along with a full year’s supply of Jones’ special “boner pills.” I guess the “boner pills” mean InfoWars fans have now switched their attention away from “election fraud,” and are now focusing on “erection fraud.” So there’s that. 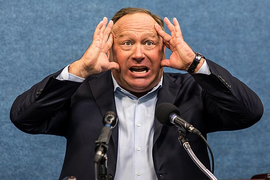 I'm hoping for a clawback by the bankruptcy judge when they see how he divested to avoid paying legitimate debts.

I recommend the Ballistic Fried Chicken with your Tactical Mac and Cheese.

He is seriously allergic to facts, reason and comprehension. He is addicted to lies, falsehood and deception. I have no time for such trash.