After making a speech at a recent Trump rally in Illinois, where she told the crowd that God “anointed" Donald Trump to become president, Rep. Lauren Boebert (R-CO) spoke to Real America's Voice about the Supreme Court's decision to overturn Roe v. Wade, arguing that former President Donald Trump was "prayed into office by millions of Americans,” supposedly so he could stack the Supreme Court with right-wing zealots who would then end federal abortion rights.

Gee, now does she mean Trump was “prayed,” or “preyed” into office?” Or, maybe even “paid into office?” Whatever! Anyway, there may actually be some validity in what Boebert is saying about Trump being put into office by a mysterious force, because as we all know - Trump lost the popular vote by 3 million votes, so he definitely wasn’t “voted” into office. That’s for sure.

Not to mention, one would think votes are much easier to count than prayers, but it appears Boebert and her pals have connections “in high places” where they can make sure those Christian Nationalist prayers get properly counted. Why, according to Boebert, evangelical Christians now seem to have themselves a brand new “living savior” in the form of Donald Trump. Hell, move the fuck over Yahweh, there’s a new kid in town.

So, evangelical Christian Nationalist dreams are coming true - Trump has “stacked the court” with folks who “swore on the Bible that Roe v. Wade was the law of the land and they would uphold the law.” Of course, they lied, but Christian Nationalists say it’s OK to lie because it’s "Lying for the Lord.” Fact is, the Bible is just like the Constitution for Republicans, they only follow the parts they like.

Of course, the truth is - if things like “prayers” were really a solution to humanity’s problems, then humanity wouldn't have any problems. Yet, here we find ourselves in 2022 at the mercy of a bunch of Christian Nationalist voters, whose minds are still stuck somewhere way back in the “Bronze Age.” I’d say “God help us,” but we already know which side he’s on.

Now some of you may ask, just how could anyone in their right mind ever vote for this ignorant, high school dropout of a con artist? Well, the answer is really quite simple - compared to them, Boebert is a genius. Besides, even if they do end up getting screwed, they’ll always have their MyPillow to cry on. 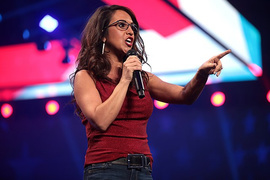 They should just STFU and pray then, and stay away from the polls.

She forgot that God threw him out.

It takes a prize idiot to claim that God anointed Donald Trump to become president.

There are just that many really evil people, stooges and gullible marks out in the world. It’s why religion still flourishes…

Posted by johnnyrobishRussian Chess-Playing Robot Breaks 7-Year-Old Opponent’s Finger A chess-playing robot in Russia created quite a controversy while playing a 7-year-old opponent, a child who is one of the top ...

Posted by johnnyrobishMelania Too Busy Fulfilling First Lady Duties to Be Aware of Jan 6th Violence In a recent interview with Fox News, former First Lady Melania Trump claimed that during the January 6th Capitol ...

Posted by johnnyrobishIndiana Mall Shooting Leaves Three Dead and Two Wounded Three people are dead and two wounded after a gunman opened fire at a Greenwood, Indiana shopping mall, in yet another mass shooting that ...