We rely on members to let us know when posts contain content that violiate the community guidelines. The most common reason that content gets flagged is that it contains dehumanizing or trolling/baiting text. Getting too many flagged posts will result in account termination.
Visit Group Join Group
1 7

Conservative legal organization the Thomas More Society, has been working with Republican-led state legislatures and other national antiabortion groups in drafting model legislation which would prohibit people in states where abortions are banned - from seeking the procedure elsewhere.

Gee, the party of small government says what? It seems these MAGA Christians who wanna police women sure seem to have lots of time on their hands - not to mention plenty of money too! So, apparently, a woman is going to have to provide proof she's not pregnant if she wants to travel to another state. Let’s see, how would that work?

One thing these theocratic Christian states might do is force all of their “womenfolk” to get tattoos of their “state seal” on their arms. You know, just like farmers do when they brand livestock. That would sure make it a helluva lot easier for bounty hunters, when they search for escaped women in violation of the new “Fugitive Woman Act.”

You see, in the eyes of Republicans, women aren't even “Americans” anymore. They're just the property of whatever state it is where they happen to reside. Now, some may ask, “how could any woman in their right mind ever vote Republican?” Well, the thing is, these MAGA half-wits have always “salivated” over Draconian laws - that is, until they discovered that they too are on the menu.

And, it won’t stop there. Women of childbearing age will need to surrender their driver's licenses. Can’t have them just hopping in a car and driving to another state, can we? In addition, expect new laws where women who fail to wear bras or makeup can be prosecuted as lesbians, and women wearing too much makeup, could be prosecuted as harlots. But, don’t get discouraged, because other than that - the future looks quite rosy for women in “Republican America.” 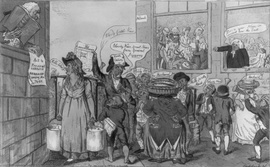 Thanks for the post. In the end all of this will come back to bite them in the ass.