Three people are dead and two wounded after a gunman opened fire at a Greenwood, Indiana shopping mall, in yet another mass shooting that occurred less than three weeks after Indiana authorized “permitless concealed carry” in public areas. The gunman was eventually killed by an armed bystander who was on the scene when the shooting took place.

Well, I’ll be! A perpetrator was finally shot by one of those “good guys with a gun?” So, let’s see - so far we’ve had 390 mass shootings in 2022, and one “good guy” coming to the rescue. Now, I hate to complain, but as more and more states move to allow almost anyone who can breathe to be armed to the teeth, just how in the hell is someone supposed to figure out which guy with the gun is actually the “good guy” every time a gunfight breaks out at the local mall?

Of course, if you’re a Republican, the answer to that question is apparently quite simple, “the last one still standing is the good guy. Everyone else - is simply collateral damage.” Gee, kind of makes you wonder, where the hell were the “good guys with a gun” when all those fascist thugs were storming the Capitol back in January? Oh wait, it seems their sympathies were with “the other side.” My mistake.

Anyway, the fun doesn’t stop there folks. Why, some “good guy” in New Haven was recently busted after he pulled a gun on two women for not thanking him for holding the door open for them. Sure, that sounds rational - impose a possible death sentence for forgetting to thank someone for opening the door. Good thing that “good guy” took action, or else those women might’ve pulled the same stunt on their way back out. Frankly, I shudder to think what the carnage might have been had that happened.

Not to mention last week, all but four Republicans voted against the “Active Shooter Alert Act,” which would’ve simply notified folks if an active shooter was in their community. Thank goodness Republicans were there to prevent this disgusting government intrusion into our lives. Why, whenever there is a mass shooting, Republicans are among the first to send out their “thoughts and pralines.” Since when is that not enough? 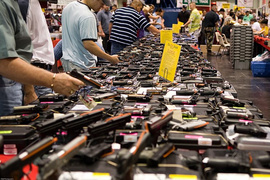 . Story is right up your alley, you did not disappoint! Thank YOU!