We rely on members to let us know when posts contain content that violiate the community guidelines. The most common reason that content gets flagged is that it contains dehumanizing or trolling/baiting text. Getting too many flagged posts will result in account termination.
Visit Group Join Group
2 9

The Dr. Oz Campaign has been on the receiving end of tons of mockery over a campaign video in which the doctor blamed the high price of “crudités” on Joe Biden, and then managed to mangle the names of the two grocery stores he visited in the video. In response to the crudités mockery, the Oz Campaign issued a statement claiming that John Fetterman, Dr. Oz’s Democratic opponent for US Senate in Pennsylvania, might not have even had his stroke if he “had ever eaten a vegetable in his life.”

OK, got it, doctor! Sound nutritional advice from a snake-oil TV doctor who brags about being endorsed by Donald Trump, an orange specimen who basically lives on nothing but McDonald’s cheeseburgers, fries, and diet Cokes. Now, not to sound critical, but perhaps Dr. Oz might concern himself a little more with what flows out of his mouth, rather than what goes into John Fetterman’s mouth.

Of course, we all know that’s not very likely. Campaign ads like Dr. Oz’s grocery store fiasco, demonstrate how much wealthy Republican politicians love cosplaying as “just regular working-class folk.” That said, it’s funny how quickly things can change! Why, it seems like just yesterday, when Republicans implied Michelle Obama was Satan incarnate - for simply suggesting similar dietary choices be made available in public schools.

Naturally, Oz made his diagnosis without ever examining Fetterman. Now, what confuses me is how a doctor in New Jersey can tell if an individual who is in Pennsylvania, hasn’t been consuming enough “crudités?” Oddly, Dr. Oz is not only a TV personality and politician, but also a “cardiac surgeon.” That’s right, “a heart surgeon,” which makes no sense, because if we’ve learned anything during these Trump years - its that Republicans don’t even have hearts. 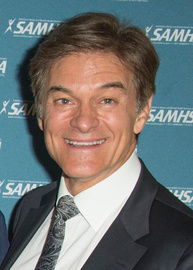 The rich cosplaying the rest of us - well said.

Dr. Oz is so bad that even Trump has deserted him.

I think everyone has written off Oz. I'm glad because Fetterman is such a strong spokesperson for cannabis. It shows one doesn't have to be anti-cannabis to be popular. A lesson for the president.