We rely on members to let us know when posts contain content that violiate the community guidelines. The most common reason that content gets flagged is that it contains dehumanizing or trolling/baiting text. Getting too many flagged posts will result in account termination.
12 7 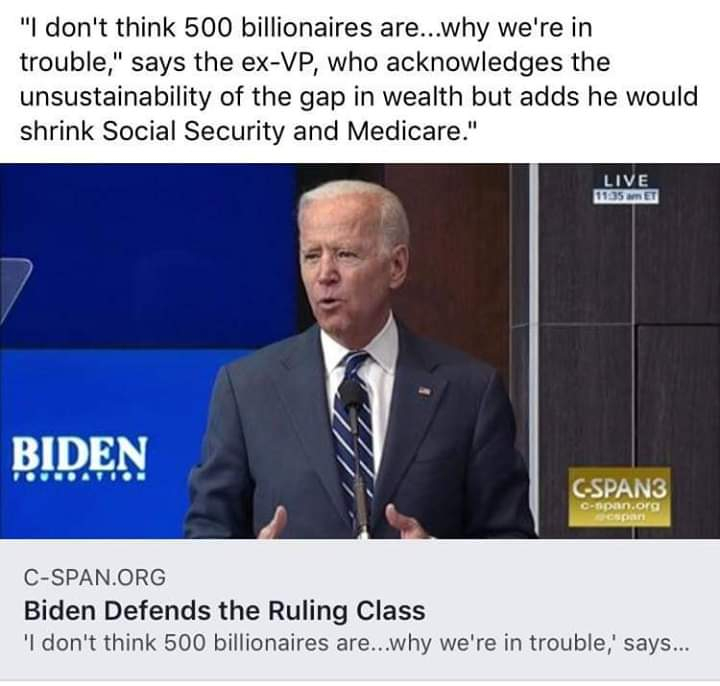 I have no detailed experience or knowledge of Joe Biden at all -- apart from the fact that his reputation is that of an all-round nice guy. But then, it would be in line with a broad Obama approach -- being unfailingly "nice" and doing nothing at all about the perpetually uneven playing field that sees the rich get richer. If that quote above is by Biden it seems to me much more in line with a moderate Republican than someone who should be in the current Democrat party. If that money horded by 500 billionaires was freed up, he doesn't think that would do incredible good for redistribution? Shrinking social security and medicare? -- either he's gone off the deep end into dementia or he's definitely on the wrong side> Wonder who he expects to appeal to as a presidential candidate. Acknowledges the huge gap in wealth, won't do anything significant about it, and wants to cripple the only existing supports the poor have... I don't get it.

He a wicked good guy to his pockets.He gave a backdoor endorsement to a rethuglican running for re-election in Illnois during a speech to a right leanig business group. And accepted the 250k payment during the 2016 elections.

Nice enough, but not what we need right now. A tad cozy with the corporate privileged set.

He's another status-quo, neoliberal centrist. He'll go along with the same type of "suck up to the the wealthy and expand the wars" crap that Hillary stood for. I'd only vote for him if it came down to a choice between him or Trump.

He's too centrist....too conservative. I supported Bernie in 2015-2016....I sent $$ in within minutes after he announced his candidacy.

And don't give me that ageist crap.

And vote to affirm SCJ Thomas and busted hard on Anota Hill..

This horse is going to burn out. He is beyond his age to run this race. Trump will massacre him in broad daylight on stage.

Not my cup of tea.

I wish he wasn't so beholden to those 500 billionaires. I like Joe, but I'm ready for a non corporate Democrat to represent our party in Washington.