Republican congressman Paul Gosar, who tweeted a fake photoshopped picture of former President Barack Obama shaking hands with Iranian President Hassan Rouhani, defended his actions after it was exposed as a lie by claiming “no one said this wasn’t photoshopped,” then adding “but the pic still makes a valid point.”

Oh, I get it. The old “I never said I wasn't lying” defense. Anyway, interesting position that Rep. Gosar’s taking on this. I mean, I assume this also means he’d have no problem whatsoever with a political opponent posting a doctored photo of him with say - underage boys? And it’s funny, but I can’t seem to recall one Republican calling him out for promoting fake news.

Why, this is a guy who’s very own family actually went on TV during the last election, and begged people to NOT vote for him. Gee, hard to imagine why they’d feel that way. And the guy’s a dentist for Christ’s sake! All I can say is, his patients might wanna have another look at those “gold” caps he put in their mouth.

Of course, with President Trump, no one even needs to bother photoshopping his pics. Not when there’s so many of REAL pictures of him palling around with the likes of Vladimir Putin, Recep Tayyip Erdoğan, Kim Jong Un, Mohammed bin Salman, Rodrigo Duterte and even a photograph of him “saluting” a prominent North Korean General. But hell, I guess it’s only a bad thing - if it’s not a Republican. 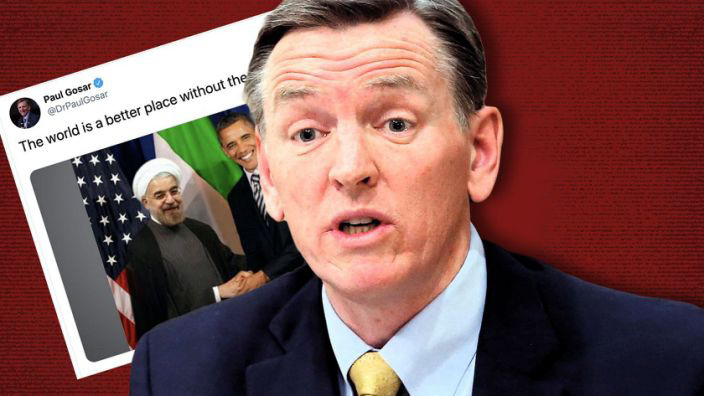 Needs to be flood of photoshopped images of Gosar in embarrassing circumstances and send all over the internet.

Ah gee whiz folks this is just another example of Kellyanne's alternative facts. Ole Pauly knows that regardless of getting called out as a lier there are enough Trumpliican supporters that will believe it. So it will get passed around as a Giuliani truth and be another reason for the "good people on both sides" to rant about Obama and praise our "Dear Leader" for being tough on Iran. And Pauly will get Donny strokes.

People like him are great candidates for a labotomy.

First however, they'd need to find something to lobotomize.

It’s always ok to do shit like this if you’re a repub... remember IOKIYAR