After a far right protester, part of a heavily armed 600-vehicle caravan of nationalist Trump supporters who entered Portland with plans to confront BLM protestors, was fatally shot - acting Homeland Security Secretary Chad Wolf has been threatening to send in federal law enforcement to confront the BLM protesters - even though Portland officials warn sending in the Feds will only further inflame tensions.

Now, let’s see here. President Trump makes a series of inflammatory speeches, which dog whistle his cult’s nationalist storm troopers to head into Portland for the sole purpose of using the threat of violence to try and intimidate BLM protesters - and then he blames all the chaos on city officials?

I mean, gee whiz - who could have ever imagined that a heavily armed contingent of angry nationalists, coming into town with loaded weapons, intent on confronting Black Lives Matter demonstrators, would lead to violence? Incomprehensible, I tell you!

Now, I don’t know about you guys, but all this sort of makes me long for the good old days. You remember, back when Trump supporters lived peacefully in their mom's basements, and dreamed of one-day losing their virginity to one of those dancers in the music videos. 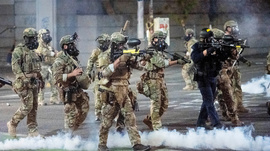 Looks like the civil war starts here. The cheeto wants to start a conflict so he can stop the election and stay fearless leader. Thoughts?

That's his plan exactly my friend.