Joltin’ Joe Biden’s recent announcement that he intends to pardon everyone with a federal conviction for smoking or possessing marijuana, has been throwing Republicans into a total “Reefer Madness” frenzy. So much so, that Fox host Tucker Carlson saw fit to invite an “expert” on Black reefer addiction, none other than white supremacist Heather Mac Donald of the right-wing “Manhattan Institute,” to explain the situation. Mac Donald complained Biden justified his move by claiming Blacks are disproportionately more likely to be arrested for cannabis than Whites, despite a similar rate of cannabis use. Mac Donald said that claim is totally false, and implied Blacks get addicted to marijuana at significantly higher rates than everyone else.

So says a woman who has probably asked to “speak to the manager” in just about every business she's ever patronized. Got to hand it to old Tucker though. He really knows how to get to the “bottom” of things. Who better to get unbiased information about “Black people and marijuana addiction,” than from a woman who has basically built her entire career around claiming Black people are “innate criminals?” A woman who says “the most pressing issue terrified voters face right now, is the ongoing post-George Floyd crimewave.”

Gee, what a damn shame Mac Donald wasn’t wearing pearls during the Tucker interview, so she could have clutched them tightly against her chest. Kind of makes you wonder, just what century is her target audience living in, anyway? I mean, about the only thing missing in her rant, was her warning Tucker’s viewers that listening to Count Basie, Cab Calloway, and Duke Ellington music, will surely lead white kids right down that path of smoking those cigarettes that don’t have any brand names on them.

Oh well, as they say, “Not that there’s anything wrong with that!” Because, is it just me, or is there even such a thing as a “Marijuana Treatment Center?” I mean, who the hell would check into Betty Ford for “weed addiction?” The fact is, cannabis isn’t physically addictive, and there is no known fatal dose. Believe me, if there were, I would’ve definitely discovered it back when I was in my 20s and 30s.

So, who says Republicans are out of touch? Nothing says welcome to the 2022s, like listening to some maniac ramble on about “marijuana addiction,” yet totally ignore all the millions addicted to prescription painkillers. So, what’s next for Tucker Carlson you may ask? Well, my guess is, like any dedicated scientist, he’ll be busy figuring out how to combine White Replacement Theory, Christian theocracy, Ted Nugent music, and Reefer Madness, all into one beautiful, unified theory - of total insanity. 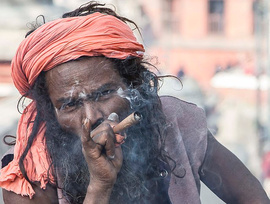 Good one. I'm sure the little old white lady who lives in my building was throughly enjoying that broadcast. She only watches faux news AND she has already stated to me, AS FACT, they (meaning black people) are not as smart as us(meaning white folk). Course that statement alone tells me all I need to know about her level of knowledge. She is also a 7th Day Adventist who along with the Morons are a pretty racist group of people.

P.S. Can Faux News please run a piece implying that Caucasians are hard wired for racism?

What else could you possible expect from Fucker Tarlson? Please remember that he is being paid megabucks by Faux News.

Posted by SeaGreenEyezThe 4 women controlling the most powerful levers of government: 'We are the table' - CNNPolitics