Prime example of why atheists get testy from time to time. 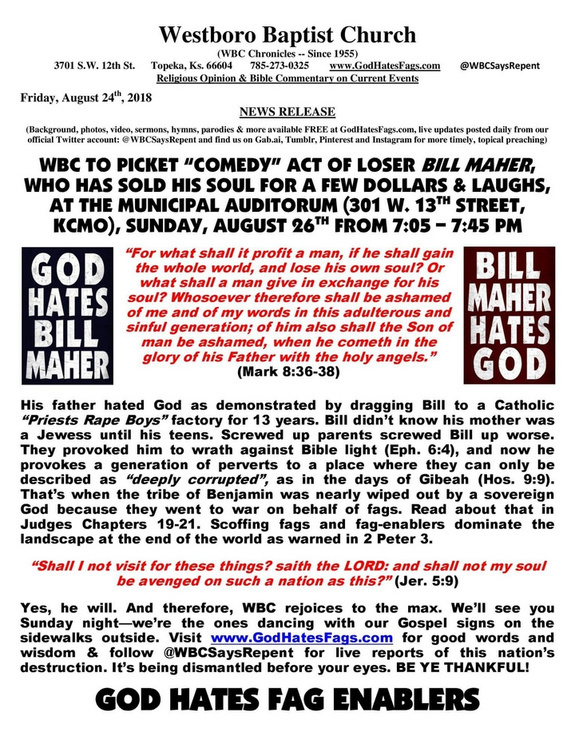 Wow a classic example of hatemongers

I had to read just one word and I knew I was done. Westboro. Now, they do serve a purpose, believe it or not. They are probably one of the best examples to prove God does not exist. And if I am wrong and he does then his sense of humor is really messed up.

Bill’s getting to them

Seriously, that’s hate speech! If we lived in the nation of freedom most tout, they’d be prosecuted, convicted & sentenced.. But we don’t, we live in the USA, where freedom of speech is apparently displaced by incitement to murder … because that’s obviously what such BS is meant to do, target their perceived enemy. Hard to lock em up though … when the cops, prosecutor and judge have their Klan robes in the closet..

I find them distasteful, and with our current political climate, dangerous as well.

In Canada they would be facing charges for hate speech. Canada supports religious freedom but not hate crimes.

They tried to protest at a soldier's funeral here during the Gulf War. It took a full 15 minutes for all the bikers to go past my house on the way to the service and they were not going slow either. Those people never even got close.

That makes me happy

Let's face it. The Westboro' baptists church - all 40 odd of them - are just trolls.

A bunch of muppetts who garner attention by being dicks.

Yet people continue to give them air time and more exposure that their number (and minds) deserve.

They won't go away, but it will help.

It's not that easy to ignore them when your seventh grader is crying because they are being hostile to her gay friends. I applaud you for being able to ignore them, but I am not that evolved yet. Maybe someday though ?

@DoctoralZombie I have the luxury of living 5000 miles away too.....

We have similar groups here in the Uk who get far more air time than their limited numbers deserve - even your president retweets the lies they post about muslims and no-go areas here!!!!

@Uncorrugated Ugh. Why is it this way!?!

Need a big red stamp to go over the top of this flyer it could read (What is wrong with you haters?)

I'm with you, I just don't get it either.

These people amuse me more than anything. The ones trying to force religion into our government and schools piss me off.

Yeah, but the Satanic Temple does a hilarious job of taking care of those instances. Now that's some amusing stuff. I had the displeasure of being someplace where Westboro was demonstrating, and I really dislike them.

@DoctoralZombie I agree, and I don't find West Baptist amusing at all. They are a cancer connected to other cancers on society. The Satanists are much more amusing and far less dangerous, if at all. Maybe a few wackos who like sacrifice- but they would end up as serial killers or something similar anyway. The vast majority are humanistic in their approach. They are believers in something I can't believe because it indicates a recognition of god in some form.

They are a disgrace.

You candd include a link to this post in your posts and comments by including the text q:164392
Agnostic does not evaluate or guarantee the accuracy of any content. Read full disclaimer.