Let's start a grammar war!
It's Word Wednesday! The origin of "irregardless" is unknown. Many linguists think it is a blend of the words "irrespective" and "regardless." This is known as a portmanteau. Yet the blend presents a problem because of the two morphemes within it. The prefix ir- means "not" and the suffix -less means "without," creating a double negative within "irregardless." By this token, "irregardless" would mean "in regard to," which is not what proponents of the word say it means. What say you? 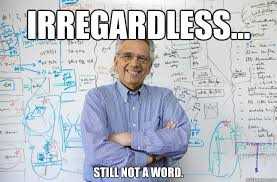 ? The act of posting many photos and updates from the annual High School prom?

Don't get me started on flammable vs inflammable...

now that is a good statement, or is it a question ?

@magicwatch They mean the same thing! I feel like I'm on crazy pills!

Whatever the source, . irregardless is, in effect, a double negative -- egro, not a proper word to be used by literate people.

ugh. I generally just inwardly cringe and don't say anything.

Also "for free" instead of "free."

The misuse of the word "literally."

I cringe, but remain silent as well. I had a supervisor that made many grammar faux pas, and it drove me crazy.

@Browneyedlady I had a supervisor who called the 12 month period from July 1 to June 30 the physical year instead of fiscal. He never pronounced my last name correctly either.

I literally never cut the mustard unless it's for free!

Those who use the word are unfearless.

Him: "State your religious preference."

@MrLizard "I 'axed' her if she wanted to go." Bunches my shorts!

@phxbillcee That one is like chalk grating on a black board .

I've heard a new word one recently being used ,'conversated', I guess it's a shortening of 'have a conversation with' ?

I heard someone use the term, "axefixiated."

Does that mean smothered with an axe?

@Donotbelieve No, axefixiated means you can't stop thinking about axes, and fondling axes. Some guys like big axes.

While I agree with your comment , I actually ran into it some twenty or so years ago . A high profile black activist , making a well publized (sp) speech , created a verb from a noun , and suddenly , it began turning up in the speech patterns of some of my African American friends and coworkers .

I'm gonna spread ambigardless around the internet until 13-year-olds start rolling their eyes and telling people what it means.

I don't care for the word. It is a bit confusion and I try to ask he speaker what her or she means to make sure I understand their intention. But at the end of the day is all about communication and it looks like this word is destined to be part of the normal lexicon irregardless of what I think

When someone uses "irregardless", I want to punch them in the throat.
Same with "as of yet", "fustrated", or "idear".
It's even worse when they're on television, and should know better.

Subpossebly they are not too clever.

I hate that SO much!

@BufftonBeotch on a tangent, I used to say worsh prit near til my teens.

@Hicks66 I really don't mind regionalisms in casual conversation.
I'm from near "Picksburg" where there is some of the worst "yinz guys.wanna chipped ham sammich?"
It is formal settings or speeches where I shake my head. .

@Donotbelieve That's another one!!! There's no damned 'B' in that word!!!

@KKGator It makes me wince.

A word is "a word" if it has meaning and is understood by others. So, though some people say that words such as "irregardless" and "ain't" aren't REALLY words, they are indeed. Flurgle is a word if we all understand what type of thing a flurgle is or what type of action flurgling is. New words come into existance all the time because language is fluid and evolves. Even though I'm not really sure what "crunk" means, it is indeed a word since at least some portion of our culture knows what it means and how to use it in a sentence.

Also, according to Merriam-Webster dictionary, "irregardless" is a word that is noted to have been used as far back as 1927.

regardless of what you say,...

That's right! Don't let the proscriptive school win! What the people speak is what's real! Down with snobbery!

....Says the guy whose eyes twitch when you "its" wrong.
But he doesn't smack you for it! Down with puffery! Long live language change!

How you use grammar says a lot about who you are , where and how you grew up /were raised , and your educational level . The largest part of education is about learning and understanding words . And a lot of words are borrowed from other languages .

what about where is it AT? Or different than instead of from. But I never got the proper way to use continuously/continually

The one that’s been getting under my skin lately is "A whole nother" because another is not a complete thought and needs to be qualified as a "whole". Oh and then I have a friend that is money obsessed, maybe this doesn’t belong here, but he constantly refers to "fuck-tons of money". I have no idea how much that is.

Irregardless they both confound me.?

Pardon my French, but we speak proper fucking English here.

Don't get me started on the misuse of "Begging the question!" Hearing or reading someone say, "It begs the question," and then following up with a QUESTION drives me nuts! These crazy words and misused phrases are so prevalent that they are slowly making their way into dictionaries! We are becoming a nation of illiterates.

It IS redundant. That's why it ain't no word!

I got in trouble at my last job for such highfalootin' language as "indeed" and "such that." I am frequently--unfairly, infuriatingly--miscast as being "superior" or "talking down" to people when I'm just speaking naturally and spontaneously, with no agenda whatsoever. Not grammar-Naziing out. Not rolling my eyes when someone says "irregardless." Just talking, using the same kind of language I'm using now.

I guess most people, amazingly, don't check for secondary corroborating evidence (like tone, posture, gesture, facial expressions, context, etc.) before they tell themselves a story about a person's motivation or intention--at least, not when said story ameliorates their own bruised, insecure egos. Thus, I keep my mouth shut, mostly, IRL, these days.

Language changes. It's liquid. Beautiful. I can appreciate that now. I find it fascinating. But I still endeavor to use my language "correctly"--as it was taught to me in school, and as I developed my own understanding of it in adulthood through reading and writing.

I worked for an attorney, & I have just 2 yrs of college almost 30 yrs prior to this, & he constantly ragged me about my vocabulary. Not that it was poor, that I naturally used what I thought were just the correct words for the situation! He was a good boss & a very good attorney, but this was a real aggravation!

Irregardless is not a word masquerading as a word. There are a lot of those. However, let us extend this a bit and look at some word combinations commonly used that should find their way to the nearest waste bin.

Free gift: I don't know who the copywriter was who coined this one, but he/she should have been shot.

"Continue on: ** There are a couple of instances where this is legitimate. The others are not.

In my humble opinion: This phrase was cliché and trite 50 years before I was born. It is also meaningless. One may have an opinion that is not expressed and that person may remain humble. In order to express an opinion says the person thinks what they have to say is something worth hearing, which is anything but humble.

Added bonus: This one is a beauty. "There are three kinds of people in this world. Those who understand math and those who don't."

When someone says "so so and Myself", I have to grit my teeth.

Yes indeed. Using "myself" as a subject is becoming more common, and, like you, it has me gritting my teeth (having already torn all my hair out).

I had 2 college science professors that used the word irregardless. To each I discreetly and anonymously left a note on their desks after class explaining the mistake.and why. I didn't hear it used after that but saw the educators eyes scanning the class for possible candidates. I have heard supposably instead of supposedly quite often. How about nuculear instead of nuclear? Poor George W.

I thought it was nucular...

You can't start a grammar war, it has to be a grammer war.

It still drives me nuts, "irregardless" that is, to hear otherwise educated people use the word, even after the grammar people added it officially to the dictionary. I used to take the English language seriously and look words up in the dictionary to make sure I was using words properly. Now I figure there isn't much point in doing so, because not many people give a damn and "they" will just add nonsensicle words to the lexicon after they become common enough that someone "in charge" of such things decides to make them officially acceptable anyway.

I am well aware languages evolve over time, but I didn't realize in my youth how quickly it happens, leaving people somewhat 'lost' well within the span of their lifetimes when trying to comprehend what the hell 'young' people are talking about. There's some great books on the topic, though, and there isn't much choice in the matter in the end, the 'whippersnappers' will win out in the end, and language will go on in whatever form the bulk of people using it see fit.

Other words get morphed or misused as well, of course, one of my pet peeves is the use of the word "like" as every 3rd or 4th word in a sentence, it's far worse than Oxford commas and the like, just a bloody useless addition to sentence structure that, if anyone did sentence trees anymore, would make an unholy mess of things in plotting out.

But such is the way of the world, I suppose.

Now you're just showing off!!! LOL

You can include a link to this post in your posts and comments by including the text q:45209
Agnostic does not evaluate or guarantee the accuracy of any content. Read full disclaimer.