Just watched a movie on Netflix called The Most Hated Women In America. It's the story Of Madalyn Murray O'Hair. I recommend it

I lived in Austin in the 80s. Her office building was on my way to one of the jobs I had. It was a very small, unassuming gray building. The very high chain link fencing was the only clue something was happening there. Never any cars. I forget when they went missing. I'll be forever grateful to her for the advocacy of getting prayer out of public schools. 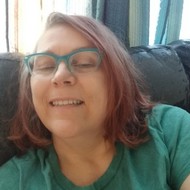 It WAS interesting. Thanks for the lead.

Glad you liked it

@Cirdan Netflix recommended "Seeing Allred" because I watched that. Watching it now. You may want to check it out too. Not about religion but looks interesting.

Oh, Allred as in Gloria Allred! I just watched the trailer. Thanks for the heads up Archer, I put it on my list. Let me know if you like it!

@Cirdan halfway through. Her fan club is about as big as Madalyns. Lol

On my way to watch it. Thanks

Why was she hated?

She was very abrasive and hostile towards Christians in a time where no one else was publicly like that. It's much more common now, but back then it was unheard of, especially from woman in Texas.

Thank you for the recommendation.

Thanks for the heads up! It was an excellent movie. I was a member of American Atheists for a while. I'm not sure if I was still a member when they were kidnapped. I do remember there was a great deal of confusion in the organization when the family disappeared.

They left out an incident that really shows how hated Madalyn was: they had a kitten, and one day they woke up to find it nailed to the door with some message stating Christian love, like "Atheists go to hell" or something like that.

The characterization of Billy Murray was spot on, though they left out his many divorces. Madalyn dismissed him as a "professional ex atheist," and she believed that his professing to be a Christian was a lie, and that he was in it solely for the money.

All in all, a fairly accurate film.

I enjoyed it! Some here have mentioned it was not accurate. I know little of the actual events, so I'd like to know what it got wrong and right.

I also asked for clarification lol!

I watched it when they first put it up. With someone as controversial as Madalyn Murray O'Hair, I think the film could have done more with her beliefs and motivations. She made mistakes but she had to believe in what she was doing and she loved being obnoxious to those she scorned. It could have been done a lot better.

Thanks. I will have to check it out.

I saw the movie in the Netflix queue, but hesitated to watch because I remember how violent people were about her.

Back when the events occurred, I was still religious and attending church, so felt horrified that someone would do that. I didn't understand how an atheist would care what other people believed; if she didn't think a god existed..why should it matter?

I didn't realized how oppressive and pervasive the religious influence was in the schools because I wasn't resisting against it at the time.

I hear you friend. Sometimes it just a person just needs to step back and see a different point of view.

Thanks for the heads up!

Thank you, I'll check it out!

Thank you for the heads up. I will definitely watch that.

Was just trying to remember the name of this today! Will have to watch it

Thanks, I'll probably find and watch it, she was one smart broad. I was not a fan of American Atheists because they seemed too pushy, but I was impressed by MMO. She had a very quick mind and could debate theists and win every time.

It it weren't for Madalyn Murray O'Hair our children and grandchildren would still be praying in school. She was a courageous fighter for non-religious rights not to be brain-washed by Christian zealots.

I watched it and finally understood how greed had killed her and some of her family. It took a while to get it figured out because nobody cared that the leading atheist was missing or murdered. Back in the time it happened I was still a believer. As such I had perfect "Christian think" to her murder. It was simple. God killed Madalyn Murray O'Hair because she did not believe in him.
This is the same false logic that believers put on you about religion all the time.

Thanks for the recommendation, I saw it but wasn’t sure if it was worth watching

Good cast and she was a bold person. I enjoyed it

You can include a link to this post in your posts and comments by including the text q:57887
Agnostic does not evaluate or guarantee the accuracy of any content. Read full disclaimer.