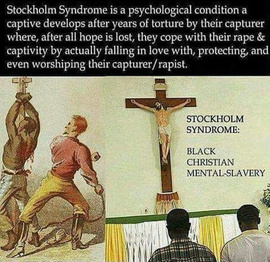 I don't get anyone still adhering to religion. But nearly all black churches are of a Liberation theology.

Not the Damnation theology like a white Southern Baptist.

It is ironic to me that Blacks and many Native Americans adopted--and still follow--Christianity. Same with women.

Seems obscene that so many whites feel motivated to state what they think black people are thinking. Black people are more than capable of stating what they think, only if whites would actually listen. Oh and surprise, surprise...black people do not think in some monolithic manner. They hold a wide range of views. But you have to listen to them first in order to understand.

I've never understood why religion was able to manifest such an iron-fisted hold on black folks. It's part and parcel of their historical bondage.

"years of torture" ? slaves were considered property throughout history, in all slave holding societies, world wide. in all of them (surely with some exceptions due to owner psychopathology) no slaveholder could have any conceivable interest in torturing a slave. its poor business management what would be the benefit? american slaves were expensive. surely torture happened, and surely it was rare. there is zero evidence for anything remotely like stockholm syndrome among blacks beyond president lincoln. please try to make at least minimal prima facie sense when issuing your BLM propaganda. you ruin the good points that might be made about the undoubted evils of slavery when you spew such bullshit. you insult the intelligence of your readers. and the white readers among them insult your intelligence by swallowing such bullshit in silence. perhaps the most pernicious of the new racisms (BLM seems to have missed it in its ever growing list of "racisms" ) is the refusal of the white media to confront so many blatant lies. instead the white world seems to have given the media over to the blacks. commercials, news staff, editorial...the whole shebang. if there is a stolkholm syndrome here, its whites, cowed by years of riot, arson, looting, murder, assault, and the never ending threat of same. "no justice, no peace"? . and lets not forget the political demographic ground shift. your first taste of majority power. what a sad mess youre making of it. where's the intellectual integrity?

now ive seen no threats by any of the blacks ive met lately, they all seem quite decent, none want to talk this bullshit. it seems to come from the hot house "progressive" black leadership. and for that failed leadership, the black church is clearly a major hot house. stockholm syndrome? more like shameful opportunism!

What an unmitigated load of garbage.
There's so much wrong with with your line of "reasoning", one can only surmise that your agenda has nothing to do with actual reality.

@KKGator ...nice name calling. can we see some reasoned fact based thought?

Cruelty doesn't have to be blatant to be cruel. Subtle cruelty is worse. The quiet kind that no one else sees, so no one can support you when you try to get help. I'm sure slave owners were masters at subtle cruelty.

Do you really want to play you, filthy racist fuq?

The open torture of black people really did begin after emancipation.

The 13th Amendment has enabled the continued slavery and forced labor of black men.

The end of slavery ended the bodies of black people being respected by the likes of you as the property of a white man higher than you will ever be.

You have a sliver of a point that slaves wee generally treated as well as a farmer's ox.

An ox does not have the human awareness to see its 12 year old daughter being raped by its Master, though.

An ox does would not understand the child being ripped from the arms of its mother because it was "property."

But your racist mind thinks it was OK to treat humans as property.

@holdenc98 You live in the south and it sounds like you are from there. Unless you are lying you are 81. The vast majority of southern men your age are racist. Slavery has existed around the world for as long as some sort of method for recording events. Slaves have always been mistreated, they are slaves. If you really think slaves in america had it so good, then why don't you volunteer to become a slave.

I live and have lived all my life in Michigan. All kinds of white southern people have traveled to Michigan over the last 80 years to work in our auto plants. 8 out of 10 of them were nothing more than racist white trash. I am calling you racist white trash. If that offends you, too bad.

@linxminx, @BufftonBeotch TO BUFFTON ...........IM SORRY. you do raise a couple points worth talking about, but your tone is just too hatefull, dishonest, stupis....just plain vile. is this what's inside an npr progressive? its just too low to waste time answering.

@linxminx, @BufftonBeotch, @creative51 ...... TO CREATIVE--- ive talked with you before, it grieves me to see you fall to writing something as low as this. i know there is better than this in you. you set out straw man stock evil positions ive directly opposed and then accuse me of advocating them them.
with this as your launch pad you then call me "racist white trash", then you challenge my 81 year old carcass to "meet you any day in the back ally" where you will "teach me the lesson of my life". really? are you drunk? even if drunk, is this you. ACCORDING TO "COMMUNITY NORMS" YOU COULD BE KICKED OFF THE CITE FOR THAT THREAT. ITS NOT IN ME TO RAT YOU OUT FOR YOUR WORDS, AND I WONT DO IT. BUT IT LOOKS LIKE IM LEARNING MORE ABOUT YOU. IT LOOKS LIKE IM A DECENT HUMAN BEING. WHO the hell ARE YOU?......... as far as the skimpy point you made, i won't lower myself to address it.

@holdenc98 I edited my comment so you do not need to tremble in fear, you racist white trash.

@creative51 the loss of the image i had of your decency saddens me. may you find and cultivate a better you. i will take a couple zanax, im sure my terror of you will soon subside

@holdenc98 What "name calling"??
I merely said that your comments had no true basis in reality.
That's not name calling.

@K SKGator TO GATOR ......... ..no...you attacked my "line of reasoning", called it a "load of garbage. true, there was no direct ad hominum attack stuff. but your words were devoid of "reasoned fact based thought" about the subject at hand, the torture of slaves. and thats the main point. and reading you elsewhere you never seem to have anything substantive to say. but given enough time, you could probably be taught to think.

@JonnaBononna ......thats some deep thinking there. i think youre ready for the progressive board of directors

Reminds me a little of that scene in Cool Hand Luke where the prison warden tells Luke he is only being cruel to Luke " for his own good". The difference here is that, for the black Christian, they really believe their slavery to the religion is for their own good. In the movie Luke, instead, knew the line was BS, and told the warden, sarcastically, " I wish you'd quit being so good to me"... Of course the warden, being the sadistic MF that he is, hits Luke twice and yells at him to never talk to him that way again, "Nevah, nevah!"....

True,so very True, sad but none-the-less 100% True.
I have always been perplexed and wondered WHY it is that the Descendants of African Slaves in America and Elsewhere would cling to a Religion that was used SOLELY to justify and enforce the right of Europeans, etc, to hold their ancestors as slaves in the first place.

Makes no sense to me either. I assume tho, they think some savior will lift them out of a world where they are 2nd and 3rd class citizens.
In other words, when all HOPE is gone..... fantasize.

You can include a link to this post in your posts and comments by including the text q:605812
Agnostic does not evaluate or guarantee the accuracy of any content. Read full disclaimer.