We rely on members to let us know when posts contain content that violiate the community guidelines. The most common reason that content gets flagged is that it contains dehumanizing or trolling/baiting text. Getting too many flagged posts will result in account termination.
Visit Group Join Group
9 15

Can't say I blame her. [outline.com] 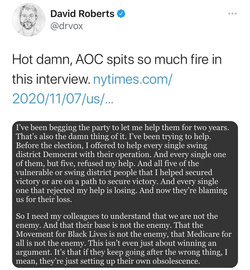 It should be a wake-up call that so many key states were so close when the opposition was the most hated president we've ever had.

With Bernie being pushed out AOC is the only person to keep me interested in politics.I noticed her during occupy Wall Street movement and she’s getting better every day!!

Progressives aren't killing Capitalism, capitalist are killing Capitalism.
Moderate Democrats are really not much better than Republicans, just a bit less likely to commit violence.
Everyone wants Universal health care, and that NOT cycled through the Insurance middle men that take all the value with damn near no service.
In a Fox News poll even conservatives want this, something Obama was too chicken shit to do.
Four things come to mind that should NEVER be privatized, the Mail, the Military, Prisons, and Health care.
All for the same reasons!

She may not want to see it or admit it, but, even if she doesn't see the DNC and the corporate establishment Dems as her enemy, they very clearly see her as THEIR enemy, which is all that really matters. She needs to wise up and prepare to run for prez in the future as a third party candidate. As they say in the dating game, "they aren't that into you"... You can't make someone treat you right or want you, all you can do is set the terms of what you will accept and what you won't, then be who you are. She may not be old enough to be prez, but she's old enough to understand that.

She nails it every damn time.
Btw didn't Pelosi say she would step down in 2020?.. cause she want the Speakership again..

I'm so sick of her. I was hoping she would lose. I think only death will remove her from the party leadership.

@Zoltans_Queen the Dems(with spines) in the house need to hold her feet to the fire on this..

Well, the progressives in the house did well this election. The moderates, not so much. So maybe they will actually have the political capital to challenge her.

@Zoltans_Queen still not nearly enough of them, unfortunately..but another election in 2 years may bolster their numbers..here's to hoping..

I belong to the party of AOC, not the one of biden.

I'd love to see her lead the party. But I can't help but assume that the establishment will do her the same as they did Bernie.

@Zoltans_Queen possibly, but she is more assertive than Bernie. Progressives need to either take over the dnc or start a new party.

Agreed. But I don't see how a new party can work.

We need to overcome the DNC and take the party back for the working class people who depend on it. Maybe AOC can do it. I hope so.

@Zoltans_Queen perhaps we start by pushing Pelosi out..

@Canndue AOC is a Democrat, Bernie is not. He’s an Independent. Progressives DO need to take over the Democratic Party. My only fear is that moderate Democrats may change their party affiliation to Independent.

Bernie has been a democrat for years. As far as I can tell, he represents the typical democratic voter much better than Pelosi or any of the others in the establishment.

When 80-90% of democratic voters want medicare for all but the leaders of the party obstruct it, they do not represent the party. They are an impediment to progress and need to be shown the door.

@Zoltans_Queen Bernie has refused to join the Democratic Party. He is an Independent. He has been since he ran for Congress and continues to be. That was one of the big things used against him.

He is the longest serving Independent in history. [en.wikipedia.org]

Oh, this I didn't know. So he has only been a Democrat during the years when he was running in the party.

It makes me respect him that much more. He is his own man.

@Zoltans_Queen He has never been a democrat, the party rules allow anyone to run for the nomination, he caucuses with the democrats and has his chaimanship of the VA committee for that reason. I have known about and liked Bernie at least since 2002, he was a weekly guest on the Thom Hartman show where he took unfiltered calls from listeners and answered every question not avoiding any. 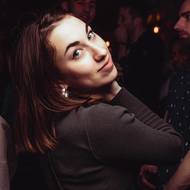 Posted by mistymoon77This topic has been floating around for quite some time now.

Posted by johnnyrobishGOP Lawmaker Vetoes Suicide Education Bill Over Teaching of Evolution Wyoming has always had either the highest, or nearly the highest suicide rate in the country, so HB 62 was introduced to ...

Posted by glennlabIt amazes me that hunters, with no formal training are required to identify a bird flying at up to 50 mph and can be fined $ thousands for a mistake, Yet LEOs can't identify a taser at 2 feet and ...