In response to the massive winter storm that wreaked havoc in Texas and surrounding states, evangelical leader Pat Robertson told his flock not to worry about “global warming, because a new “Ice Age” is upon us and “we need to make sure we have enough nuclear power, gas, and coal - to keep us warm when it really gets cold.”

Now, I’m not so sure he’s correct about another Ice Age, but the truth is, the weather in that area has been nearly as cold as Pat’s cold, cold heart - that’s for sure. That said, the argument could be made that Pat Roberson is living proof, that what we’re really going through, is not an “Ice Age,” but actually an “Ass Age.” That means that currently, about 45% of the nation, appears to be completely covered in assholes.

And, while Pat can be rather annoying at times, I do have to admit it’s quite entertaining listening to a “dinosaur” warning everyone - about a coming ice age. Hell, as far as I can determine, the only reason this old fool is even still around, is because he’s been drinking the blood of virgins.

Meanwhile, we’re all left on pins and needles, waiting for Pat and his team of biblical scientists, to figure out exactly where the LGBTQ community, libtards, abortionists, evolution teachers, George Soros, and Antifa - all fit into his final analysis of why God made this deadly storm happen in the first place. 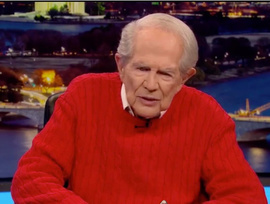 He's been pretending to be a prophet (or is it "profit" ) since the '70s and never been right. Stop feeding the trolls, if he's not a troll I don't know what is.

When will they unplug this animatron?

He really spews whatever bullshit comes into his mind, doesn’t he?

I would like to observe a talk about/with him with the great Bobby Henderson!

And we all know what a good scientist he is.

The only potential hocus pocus I'm aware of is whatever is keeping this mummy animated.
Maybe he's giving Rush time to set a place up for him.
They believe stupid shit.