In a fiery speech during a House debate on the passage of the Equality Act, Rep. Greg Steube (R-FL) read from Deuteronomy 22:5 that "A woman must not wear men's clothing nor a man wear women's clothing, for the Lord your God detests anyone who does this” - adding that "When men or women claim to be able to choose their own sexual identity, they're making a statement that God did not know what he was doing when he created them.”

Well, in answer to Rep. Steube, I have no idea whether or not God knew what he was doing when he created men and women. All I know is, God sure must have been pretty damn “distracted” by the time he got around to creating Republicans, and He obviously didn't have a clue - when he created you!

Of course, I’m sure Rep. Steube, like most Trump-loving Republicans, will claim that he’s a “strict constitutionalist.” Well, goodie, goodie for him, but the last time I checked, that verse he quoted from Deuteronomy - didn’t make it into the constitution.

You know, it’s funny how under close examination, Bible-thumpers like Rep. Steube’s private lives usually turn up all kinds of rather interesting “non-biblically approved behavior.” The bottom line is, regardless of what Rep. Steube claims he knows about God’s wishes - the fact remains that Rush Limbaugh is dead, while Ru Paul is alive and well. 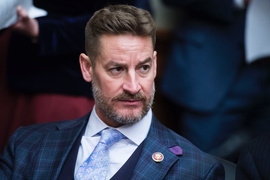 The lady doth protest too much, methinks.

Why are these uneducated people spouting off beliefs from a 2000 year old relic still given air time? Surely everyone knows of the contradictions and atrocities that the bible talks about now?

Is he going around forcing widows to marry their husbands’ brothers? No. He is fearful for own masculinity or of his feminine side it would seem.

Don’t force me to examine my feeling about this, it’s wrong, just wrong I tell you! the Old Testament, (which in 2 religions has even replaced by more understanding instructions to love others), told me so.

A creep and creatin