Trump-loving Pastor Robert Jeffress was a guest on televangelist Jim Bakker’s show recently, and told viewers that “We’re going to have to work in Heaven, but work is a gift from God.” He then added that “There’ll be no government regulations, so we’ll all enjoy work like God intended for us to enjoy it.”

Gee, sounds just wonderful, doesn’t it? Working for eternity, no pay, no work rules or regulations, no breaks, and no vacations - all for the pleasure of Jeffress’ angry God, who in return will demand blind obedience and total adoration at all times - or he'll torture you for eternity. Why, who could pass up a deal like that?

My word, if you’re gonna be treated like that, why not just get a job working over at some Amazon warehouse? Hell, not even Jeff Bezos treats his workers that badly. At least they get two bathroom breaks, even if he does monitor how long it take them to pee. This place sounds more like a “heavenly sweatshop” to me.

One thing’s for sure, on this job site, if you don’t do exactly as Pastor Jeffress’ God tells you, then you can expect to catch hell - literally! Why, no wonder the devil got thrown out. Hell, he probably tried to unionize the damn joint. 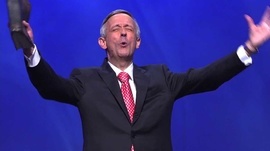 So guess what Pastor, you can't bullshit anymore! YOU ARE GOING TO HAVE TO GET A REAL JOB, how is that for divine justice

Heaven is a sweat shop ?

That picture looks like a charicature. Crisis of imagination, no doubt.
Let's see....Gawd gives us free will but limited understanding, and he is all-powerful and chooses to allow the Devil (whom he created with full foreknowledge) to tempt us with all sorts of appeals to dupe us poor saps. Then he punishes us for eternity for our poor choices. For those few who go to heaven, he will then magically make it so we love work. What happened to free will? Doesn't it fit in heaven? Or does he just give us full understanding to think as he does, in which case, why the Hell did he not do that from the beginning and spare billions from suffering and damnation?
Dumbass paradigm!