The Republican-dominated Texas legislature has just approved a bill that would allow people in Texas to carry handguns in the state without a license, a background check, or even a gun safety course. The legislation is now on its way to Gov. Greg Abbott

, who says he looks forward to signing it into law.

I’ll tell ya what, those Texas Republicans sure know how to “get all their sitting ducks in order.” Why, this just sounds like a terrific idea. I mean, who gives a “hoot” about things like affordable healthcare, a reliable electrical grid, clean water, safe sewage disposal, and well-funded schools - when armed Texans are now gonna be free to go ahead and shoot a store clerk or barista - simply for asking them to wear a face mask while shopping in their store? Now, that my friend, is what Republicans call liberty!

In fact, these new “anyone can carry laws” should work especially well in places like darkened movie theaters. Imagine, some “patriot” decides he’s finally had enough of these goddamn Hollywood liberals and their socialist movie plots - and decides he’s gonna “own the libs” by opening fire inside the theater and taking out a big bunch of the lib audience watching the film. Then, because the place is just full of “good guys with guns,” they all immediately start shooting indiscriminately in every which direction. I’m telling ya, talk about an exciting theater experience!

And, while these freedom-loving Texans are at it, why not also consider passing out guns to some of those bored-stiff children, just staring at their phones on school playgrounds? I mean, why should only grownups get to have all the fun? I bet those kids would just love it - especially, when they’re playing games like “cops and robbers.” Of course, you’d wanna make sure those kiddies have plenty of ammunition on hand, so they don’t have to spend all their lunch money buying ammo. After all, it’s pretty damn hard to shoot straight, when you’re hungry. 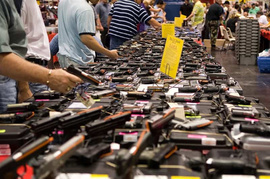 Just think, a scenario as you pictured it certainly would prove terrible for the innocent but it would be a wonderful heyday for the media! I mean come ON Biden has just been SOOOOOOOOOOOOOO boring.

Back to the old west, what they admire

Texas is such a shithole.