Freshman congresswoman Marjorie Taylor Greene (R-Ga.) and Georgia Republicans seem to have backed themselves into a corner with their unrelenting claims of election fraud. Greene, who is up for reelection in 2022, was shocked to discover that between 4 and 10% of Republican voters say they will not vote in any more elections, unless there is a recount and former President Trump is reinstated as POTUS. In fact, Trump issued a statement last week, warning "If we don't solve the Presidential Election Fraud of 2020, Republicans will not be voting in '22 or '24."

Now, I don’t often agree with Donald Trump or his MAGA supporters, but in this case - I have to admit they may be right in thinking “the whole election system is rigged, and there is no point for any Republican to ever vote again.” Why, if I were a loyal MAGA cultist, I wouldn’t trust those damn recounts either. It’s just way too easy for Antifa to infiltrate those audits, and make the final tally look as if Joe Biden still won like they did in Arizona.

Of course, as we all know, the ultimate goal of any card-carrying MAGA supporter - is to “Own the Libs.” Well, I happen to be a bonafide “libtard,” and I hereby swear on my George Soros-issued credit card, that if the Republicans don’t show up to vote in the next Georgia election, I will promise to feel absolutely and totally “owned.” You have my word on that.

Sadly, the truth is - a lot of MAGAs aren’t gonna be voting anymore anyway, given that they’re now “deceased anti-vaxxers.” Why, between killing off their base with insane vaccination conspiracies, and convincing everyone else their votes don’t count - sounds a lot like Wile E. Coyote gets flattened by his own anvil once again. Hey, wait a minute! Could it be possible this MAGA nightmare - may actually have an upside? 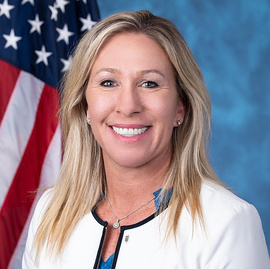 I've been enjoying their spectacular "owning me" shit ever since they decided to point loaded guns at their crotches.......every cloud has a silver lining, just as Mom taught me!

I hope this Carries through . I, for one, WILL FEEL “OWNED” !

Having thought of that, I made a a realistic evaluation: because they have undermined their own base, they are passing laws to prevent minorities from voting and continue gerrymandering voting districts, toward making themselves impossible to beat. Democracy is at risk. I WISH it were as simple as you think.

They'll simply call the election fake and install their own candidate. That's the point of their Voting Reform laws.

Is it just me or does it look like that bitch is holding a Mr. Potato Head mouth in front of her mouth?