We rely on members to let us know when posts contain content that violiate the community guidelines. The most common reason that content gets flagged is that it contains dehumanizing or trolling/baiting text. Getting too many flagged posts will result in account termination.
Visit Group Join Group
7 7

Congresswoman Lauren Boebert (R-Colo.) has issued an “apology” for making up a completely false, bigoted, and anti-Muslim story she told to a gathering of her supporters over the Thanksgiving break, where she implied Rep. Ilhan Omar (D-Minn.) might be a jihadist suicide bomber. She closed her “apology,” by stating “There are plenty of policy differences to focus on without this unnecessary distraction.”

Talk about distractions, Boebert actually married a man after he pled guilty to exposing himself to her and her girlfriends at a bowling alley when they all were underage. I would think that might be considered somewhat of an “unnecessary distraction.” One thing’s for sure, marrying a registered sex offender after he was convicted of exposing himself to her and her friends, definitely cements her position as the new “Ghislaine Maxwell” of the Colorado trailer park set.

That said, this has been some month for the House GOP “trailer trash squad.”  First Paul Gosar posts a video of him killing Alexandra Ocasio-Cortez.  Then Marjorie Taylor Green submits a bill to award Kyle Rittenhouse the Congressional Gold Medal, and now Lauren Boebert makes up a complete lie, portraying Rep. Ilhan Omar as a terrorist, simply because she’s of the Muslim faith. I’ve gotta give her credit though. She and her fellow MAGA Republicans, have somehow managed to turn what used to be a dignified US Congress, into what now resembles a “snotty middle school.”

Now, some may say “cut Rep. Boebert some slack, because she’s not really all that smart.” Oh sure, she may have taken the IQ test and it came back “negative,” but I have you know this woman now has her GED certificate! And, it only took her several attempts to pass! That’s right, she finally got her GED shortly after she got elected, and it sure looks like all that studying has definitely paid off. Why, it’s hard to find anyone who is better at “Twitter trolling,” or “owning the libs.” As for legislating? Well, not so much.

Anyway, while she may, in fact, be the least educated member of Congress, she easily makes up for any educational disparity - by being one of the most vile, disgusting people on the House floor - and believe me, there’s a lot of competition for that honor. That said, I think what scares people most about her is not her lack of education or her IQ, but the fact that there are actually enough people out there, who are dumb enough themselves - to vote her into office. 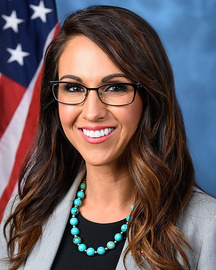 She got voted in as most of the men who have seen her would think she is cute and therefore able to do the job well. I could get real sexist and say this better but I will leave this up to your imagination and bad taste.

Not the smartest of the bunch, but at least she bought what she was shown. It may be the Muslims that actually help us answer the ideology these people are putting forth. The insanity of what they can make up will eventually catch up with them. The rich in this country will not put up with these after their profits start to decrease. With no one at the helm that knows what they are doing and thus cannot predict the betterment of their actions, they will fall. But what will take their place?

Well, Stupid is as Stupid is..

Yes, but my prescription runs out at the end of the month.

She and her friends were underage, he wasn't. Her hubby should be on a sex offenders list.

Let’s hope that the people in her district have had enough of her lies and bullshit and toss her skank ass in 2022.

It's a strongly Republican district, and they love her "disrupter" style. They think the skank is "one of them," and maybe they're right.

@Lauren is right. Places that elect scum like her LOVE the fact that she's a total pile of shit JUST LIKE THEM. You don't almost become a child-molesting US Senator because the people of Alabama are rational, intelligent, upstanding US citizens who definitely don't "understand where he's coming from because of the way these young girls dress today..."

@Lauren This is what happens when the education system is degraded and people don’t learn critical thinking skills, they elect other dipshits like themselves. They are all dumber for listening to her lies and bullshit.

@JeffMurray I was born in Alabamastan, but fortunately my parents moved away when I was still a baby. Thankful I wasn’t raised there because all my cousins there are complete morons!

@Redheadedgammy True. And when the when they don't have critical thinking to fall back on, they dig their heels in on their position even more. I don't know how to change that type of stubbornness in time for the next election.

@Lauren Repubs use Propaganda and peoples ignorance as a potent combination to keep people down and in fear of the other. It’s almost impossible to get these people to see the light. I don’t even try anymore.

@Redheadedgammy I will let Lauren and Redheadedgrammy speak for the effort of trying to change people's minds in these States. I have no experience of living around people who are that stupid, at least not out in the open. I know that the only way their minds can be changed is to put what their leaders have done for them right in front of their faces. Many of the citizens of Germany had no idea what was going on in the concentration camps, or even these camps existed. Their minds will change the instant they are marched into whatever hell the leaders they put into office put them through, not before. As long as there is food on the table and gas in the tan for most everything will be alright.

@Lauren Won't happen. We live in a post-truth world. Just last night I spoke to a woman [who has a school-aged child] about that new CNN report about guns in America. She flat out said to my face that she doesn't care what the facts are or what the numbers show, she doesn't care if she's completely wrong, she will still continue to be "wrong" because she still thinks she's right. It was a much longer conversation that contained even more ridiculous statements than that, and it made me want to pound my head into a brick wall. There is NOTHING that can fix that. If you can't agree on, or flat out don't care about, facts, what could I possibly say to you to change your mind? The only thing that you'll hear is stuff that reaffirms your beliefs. We. Are. Done. Shit is only going to get worse from here, believe that.

Just wanted to chime in on her district. My understanding is that she may be getting gerrymandered (redistricted) out of her region and into a largely blue area. That said, I've also read she may just be able to run in the newly redrawn red district. Only time will tell.

What a total cuntbag.

You sir, are insulting cuntbag’s

There are total cuntbags with money and power and there are those without. We need to make her one of the latter. Of course, that is almost impossible as long as others like her keep sending her money. Perhaps she could be sued for her involvement in the riots.