In line with the baseless claims of “election fraud” he perpetuated about the 2020 election, former President Donald Trump is now urging his endorsed favorite candidate Dr. Mehmet Oz, who is currently running neck and neck in vote tallies with his primary opponent for the US Senate David McCormick, to just “declare victory” - even before all the votes have been counted in a contest which will have far-reaching implications.

Well, I guess that’s not especially surprising. I mean, as we all know, left to his own devices, Donald Trump is the kind of guy who’d have called the Kentucky Derby when the horses are only 3/4 of the way around the track, or complained about “if only the Cincinnati Bengals would’ve listened to me and declared victory before those damn LA Rams scored in the 4th quarter of the Super Bowl!” Why, when this style of logic is employed properly, the possibilities are endless.

Anyway, let’s see here. So, we now have a professional con artist, advising a quack TV doctor. Gee, that should prove interesting! And, to top it all off, Trump is now accusing Republicans of committing “voter fraud” against their fellow Republicans. Good grief! Somehow, Mr. Trump has actually managed to convince Republicans to join a “circular firing squad.” Why, it’s no wonder they call this guy a “stable genius!” Not even the Democrats could have come up with that one.

Now, the funny thing is that Dr. Oz is running for office in Pennsylvania, yet he still remains on the voter rolls in Bergen County, New Jersey - where he voted as recently as November 2020. Not to be critical, but me thinks we may finally have ourselves a real, documented case of voter fraud here! Perhaps it’s time to head back over to the “Four Seasons Total Landscaping” once again, for one of Rudy Giuliani’s delicious “Stop the Steal” rallies.

Of course, the question is - just how can Pennsylvania settle this close primary election, so everyone will accept the outcome? Frankly, I think the only way to do it - is to leave the final decision up to Pennsylvania’s most trusted expert advisor - that, of course, is none other than THE “Punxsutawney Phil,” because when in doubt, ask a groundhog! Now, if Phil sees his shadow, that’ll mean Dr. Oz won. On the other hand, if he doesn’t see his shadow, well - that means we can expect six more weeks of Trump whining about it. 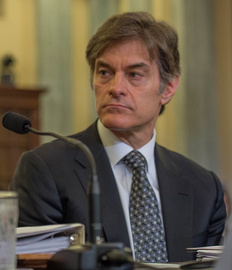 Oz is nearly as slimy as tRump. Oz is a friend of Erdogan.

Another perfect summation, complete with The solution!

Very funny, and sadly true at the same time. Thanks.