Emboldened by the Supreme Court’s likely decision to overturn Roe v Wade, Christian Nationalists are once again on the move. Trump-endorsed MAGA Michigan state House candidate Jacky Eubanks appeared on the podcast “Church Militant” this week to inform the host that she would vote in favor of legislation “banning all forms of contraception,” which she claims runs counter to God's “natural moral law.” She then added “Sex ought to be between one man and one woman, in the confines of marriage” and that “You cannot have a successful society outside of the Christian moral order.”

Exactly, because nothing says you’re pro-freedom and anti-big government, quite like passing legislation controlling other people’s sex lives! In fact, this reminds me of when Thomas Jefferson wrote, “All successful societies need a Christian moral order, and that’s why we’ve decided to form an evangelical Christian theocracy, one completely intolerant of anyone else’s beliefs.”

Of course, whenever anyone thinks of a “Christian moral order,” I’m sure the very first thing that comes to mind is the image of Donald J. Trump. Let us not forget that in addition to her devotion to eradicating “immoral sexual practices,” Eubanks is also a staunch supporter of the thrice-married, serial adulterer. Now, some may consider this to be rather “circular logic,” but in all fairness - without “circular logic,” Christian Nationalists would have no logic at all.

Hell, who says conservatives aren’t “forward-looking?” Why, these are people who are “looking forward” to bringing life back, just as it was in the late 17th century, where they can try all these libard women as witches, just like folks did back in the good old days. You see, these are folks who are determined to make “The Inquisition,” look like it was just a sleepover.

So, candidate Eubanks thinks you can’t have a “successful society outside of the Christian moral order” does she? No kidding? You might want to send that memo to America’s Jews, Muslims, Hindus, Buddhists, Agnostics, and Atheists. My guess is countries like Japan, Norway, Finland, South Korea, Sweden, and the Netherlands might also wanna have a word with her regarding that premise.

Anyway, before we time travel back to the late 1600s, I believe I’ll close with a simple little math problem, which goes something like this - “If there were no abortions, how many children do you believe would Donald J. Trump have right now?” The lucky winner will get a free, framed, autographed copy of a speech given by former paid abstinence spokesperson Bristol Palin, just before she became pregnant. Well, so much for abstinence. 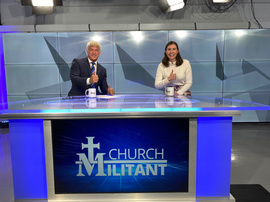 He has five which he claims so if you add to them all the rape charges and affairs, probably should be upwards of 20.

$6 per gallon gas or this craziness.

It's a choice between Dumb and Dumber.