We rely on members to let us know when posts contain content that violiate the community guidelines. The most common reason that content gets flagged is that it contains dehumanizing or trolling/baiting text. Getting too many flagged posts will result in account termination.
Visit Group Join Group
1 8

New Video Shows Putin Comparing Himself to Peter the Great

After months of denials that Russia is driven by imperial ambitions in Ukraine, a new video shows Vladimir Putin appearing to embrace that concept - comparing himself to the 18th-century Russian tsar Peter the Great, drawing a parallel between what he portrayed as their twin historic quests to win back Russian lands.

Come on! Putin’s no “Peter the Great.” He’s just a “big dick.” Hell, the way things have been going for him in Ukraine, he’s not even "Peter, the Modestly Successful.” My guess is the whole thing stemmed from a big misunderstanding when Trump and he last met, and Trump tried to flatter Putin by telling him he had a “great Peter.”

Now, who knows what kind of promises Trump made to Putin in secret, but word has it the Biden Administration has told Putin that there is “no way he’s ever gonna get Alaska back, but we will consider sending him Sarah Palin if he’d like." Hell, why not? Sarah’s basically been on his payroll for years now anyway.

Putin seems to be totally unaware of how badly this Ukraine invasion will affect Russian business. I mean, who wants to do business with a murderer? Oh, wait…Jared Kushner! Anyway, you may ask, what’s the big deal? Trump compared himself to Jesus lots of times. So true, and here’s hoping these Jan. 6th hearings finally hang his big ass up on that cross where it belongs, once and for all. 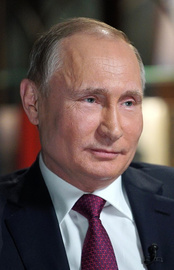