We rely on members to let us know when posts contain content that violiate the community guidelines. The most common reason that content gets flagged is that it contains dehumanizing or trolling/baiting text. Getting too many flagged posts will result in account termination.
Visit Group Join Group
3 14

He actually thinks, just like Trump, without the batshit crazy. 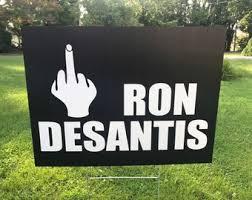 "Let's be clear, this isn't about anything I have done," [Hillsborough County DA Andrew Warren] began. "This is about what I've said. The statements that I signed onto were value statements expressing my opposition to legislation that was being considered and passed that was violating people's constitutional rights."

Given that this is true, Biden needs to instruct the DoJ to investigate and prosecute this under 18 USC 242 - abuse of Authority Under Color of Law, and 18 USC 371 - Conspiracy (involving DeSantis, the Deputy, and probably the Sheriff).

I'm guessing it also would include city elected officials, and very likely a slew of others. To be this emboldened? He's comfortable in the cover-up.

HOLY SHIT! This is what is in store if de-satan runs for president and wins. The scary thing about him he isn't as ugly or old as trump. Is he really that popular in Florida?

He's "that popular" all across this country in that sect. #frightening

He graduated from Yale and Harvard Law. Unlike the last two Republicans occupying the Oval Office, DeSantis' degrees were not participation trophies.

@mcgeo52 I knew there was another reason de-satan is so scary. He is cunning as well as smart. A scary motherfucker.

That is why he will unseat Trump as the candidate of choice in 2024 for the fascist Right. DeSatan is getting his agenda done!