Former Trump Press Secretary Kayleigh McEnany's sister Ryann McEnany announced in a video on Twitter that she will soon be launching a new dating app, exclusively for MAGA conservatives which she calls “The Right Stuff.” Ryann says the app will be “invite only,” and “there will be only two options, ladies and gentlemen,” so “you’ll never have to worry about pronouns.” Women will not have to pay to use the app, but men will. Ryann finished the ad by saying how sorry she was that MAGAs “had to endure years of bad dates with people who don’t see the world our way, the right way!”

No kidding? An actual dating app for MAGAs called “The Right Stuff?” Gee, I can see their ad now, “Ladies, have you been looking for a man who truly believes you're inherently inferior, even if his IQ is only in the double digits? Well, if you have, then you’ve come to the right place. So, just sit back and relax, keep your mouth shut, and listen to whatever the hell he tries to tell you!”

In addition, because things like the COVID pandemic have greatly restricted get-togethers, and folks aren't having very many family reunions anymore, that means MAGA dating opportunities have greatly diminished in the past two years. Say, this makes me wonder if this site even has a minimum age for dating. Asking for a friend - I’m looking at YOU, Matt Gaetz.

I mean, who wouldn’t wanna date members of the Proud Boys or the Oath Keepers? Or MAGA swingers like Matt Gaetz, Madison Cawthorn, Roger Stone, and Jerry Falwell Jr.? Wouldn’t wanna miss out on that action. Here’s a thought, though. If the site uses “no pronouns,” what happens when people have names like Kim, or Chris, or Alex, or Sammie, or even - you guessed it - Ryann? Almost enough to send a poor Christian Nationalist into a state of confusion.

Anyway, not to worry, because I’m sure there’s no way professional scammers will be drooling all over themselves trying to create bogus profiles so they can milk these love-lorn, desperate half-wits for all they’ve got. Nah, that would never happen. That said, I wonder why Ryann McEnany chose to name the site “The Right Stuff,” anyway? I guess names like “LastCallforLosers” or “FuckRepublicans” just didn’t sound quite right. 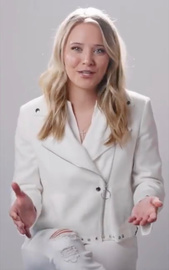 Ryann is as dim witted as her sister!

I’m all for the MAGAts having their own dating app, as that keeps them out of the general public dating world!

Who in their right mind would want to date anybody who wears a Roman torture device around their neck?

Psychos of a feather

And for once the scammers will be the good guys.