A year after Texas lawmakers enacted legislation to keep topics they say could cause students to “feel uncomfortable" out of Texas classrooms, CBS News reports that the Texas State Board of Education has voted unanimously to revisit the term “slavery,” and consider a proposal to replace it with the phrase “Involuntary Relocation.”

Gee, so slaves were just “Involuntary relocated” were they? Hell, smart move Texas. The term sure makes it sound like “slavery” was nothing more than some sort of a “clerical error.” Now, call me a silly “libtard” if you will, but somehow I suspect all this means those nice folks over at the Texas State Board of Education will also poo-poo allowing discussion about what actually followed - AFTER these folks were “involuntary relocated?”

Of course, Texas isn’t the only state trying to force educators to rewrite history the way today’s Republicans would like it to be told. In fact, Florida Gov. DeSantis and his pals, as well as many other Republican governors and their state legislatures, have been quite busy trying to pull off this very same scheme in their own states. You needn’t be a scholar to figure out this simply all boils down to - "White Christian men, good - other folks, not so good!”

Now, another question Texas might wanna explore is, “Is it also time to rewrite the Bible?” After all, slavery is frequently mentioned there. So, what’s next Texas? Reclassify the “Holocaust” as simply “Involuntary Incineration?” Once again, it doesn’t take a genius to see what these folks are really up to. Republicans are actually trying to turn this country into the “United States of Amnesia” - one state at a time.

Meanwhile, sane folks in Texas are trying their best to somehow manage to "involuntarily relocate” Gov. Greg Abbot and Attorney General Paxton out of office this November. Till then, you can expect that Texas State Board of Education to continue attempting to rewrite history and function more like a “Board of Willful Ignorance.” Nothing to worry about though - because they’re doing it all “in the name of Jesus!” 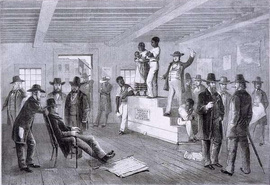 Your wry sense of humor is greatly appreciated, I can see where it can go off the rails for some folks. Slavery is a touchy topic.

Snow flakes don’t want to confront the ugly history of chattel slavery. Confronting the fact that we classified humans as livestock is a lesson our kids need to hear. It needs to be uncomfortable, if it’s not uncomfortable then it’s acceptable.

Exactly. "People who don't learn from history are doomed to repeat it." I feel this is a very relevent quote here. We should Look at Germany and take lessons from them. They absolutely teach there kids about the tragic past that some of there ancestors did during WW2. They want their people to learn about all their history, the good and the bad, both the acceptable and the uncomfortable parts. They do this so that the kids can learn that what Adolf Hitler and Nazis did was horrible and that it never happens again. So what if some history makes someone "uncomfortable." History can be ugly and history can be beautiful. But covering up history or rewriting history isn't going to help.